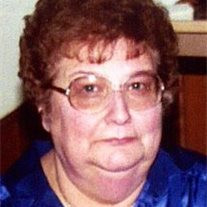 Barneveld - Judith I. Ignatius, age 71, of Barneveld, died on Saturday, October 13, 2102 at Ingleside Nursing Home in Mt. Horeb. Judy was born on March 29, 1941 in Glenview, IL. Where she attended and graduated from Maine Township West high School. In 1961 she married her high school sweetheart, Ron Ignatius. Judy started a long career in computer programming at G.D. Searle in 1972. When the family relocated to Dodgeville in 1978, she spent 10 years at the Dodgeville Chamber of Commerce, and continued on in the computing field working as a data analyst for Lands End. Later she would branch out and start her own computer business (Automated Agriculture), selling PCs, computer peripherals, and software locally. She successfully ran this business until she retired in 2010. Judy was an avid and accomplished sewer. She was a member of a number of sewing and quilting clubs. Over the years she created beautiful quilts, holiday placemats, and Christmas tree skirts for friends and family. She also spent a great deal of her spare time adding to and creating clothes for her cherished doll collection. Judy was also a very ardent sports fan. She loved the Chicago Cubs and the Wisconsin Badgers, but she especially loved watching her beloved Chicago Bears play on Sundays. Judy is survived by her three sons; Joseph of Barneveld, Glenn (Julie) of Blue Mounds, and Matthew (Linnae) of Barneveld; eight grandchildren, Lindsey, Leigh, Rachel, Tessa, Jonas, Alexander, Chase and Madelyn, and one great granddaughter, Nora. She is preceded in death by her mother Dorothy, father Harold and by her loving husband Ronald. Funeral services will be held at 11:00 a.m. on Wednesday, October 17, 2012 at BARNEVELD UNITED CHURCH OF CHRIST. Rev. Beryl Melcher will officiate. Friends may call from 4:00 p.m. until 8:00 p.m. on Tuesday and from 10:00 a.m. until time of services on Wednesday at the BARNEVELD UNITED CHURCH OF CHRIST. The family requests that in lieu of flowers, memorials be made to the Education Foundation of Barneveld Ronald Ignatius (Judy) Memorial Scholarship.

Barneveld - Judith I. Ignatius, age 71, of Barneveld, died on Saturday, October 13, 2102 at Ingleside Nursing Home in Mt. Horeb. Judy was born on March 29, 1941 in Glenview, IL. Where she attended and graduated from Maine Township West high... View Obituary & Service Information

The family of Judith I. Ignatius created this Life Tributes page to make it easy to share your memories.

Send flowers to the Ignatius family.