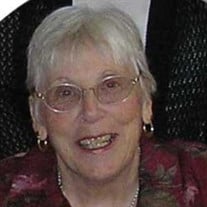 Mineral Point - Joyce Ilene (Fahrni) Ferrell passed quietly at age 82 on a sunny Sunday morning, April 26, 2020. She was born June 25, 1937 in Mt. Horeb, Wisconsin, the daughter of Cheesemaker, Fred Fahrni and his wife Florence (Hefty) Fahrni. Joyce attended grade school in Mt Horeb and the tiny two room State Grade school in Blue Mounds. She graduated from Mineral Point High School, and she always considered herself fortunate to be a member of the outstanding class of 1955.   She married George Curtis Ferrell at The Little Brown Church in the Vale in Nashua, Iowa in 1955. Fifty years later they renewed their wedding vows at the same church. They were blessed with four children; Robert, Richard, Ronald, and Rebecca. Her career outside the home sprang from her many interests. As an entrepreneur, she owned and operated J I Ferrell Wearing Apparel, a retail clothing and jewelry shop in Mineral Point. After moving to Florida, Joyce found her dream job at the University of South Florida Sarasota (USF) as a dedicated Administrative Assistant in the College of Engineering while simultaneously managing the campus computer labs and holding the position of Campus Director of the USF Distance Learning (ITFS) Program. Joyce loved the written word, and she was thrilled to end her career as an Administrative Assistant at the School of Mass Communications, University of South Florida Tampa.  As a youngster, Joyce grew to believe that we must give back through volunteering in order to make our communities better for everyone. Over the years, she served as Treasurer of the Township of Mineral Point, Director of the Mineral Point Chamber of Commerce, Sunday School teacher, President of Hope Lutheran Church, President of Lutheran Brotherhood Blackhawk District Board, Cub Scout Leader, 4-H leader, President of the Iowa County Homemakers, Director in the Shakerag Players theater group in Mineral Point, and as Assistant to the Senior Pastor of Trinity Methodist Church in Bradenton, FL.  Others clearly took note of her dedication to service. United Way of Tampa awarded her for garnering the greatest increase in donations in her territory. She was also very proud and grateful to be named USF Outstanding Employee in the College of Engineering, then a year later as USF Outstanding Employee. She was forever proud of her Swiss heritage, but when she learned as a child that she was one-quarter Norwegian, she reasoned her feet might be Norwegian, but the rest of her was most definitely Swiss. Early on she began a quest that continued throughout her life to tirelessly research and carefully document both sides of her family’s genealogy for future generations. While doing so, she befriended several “new” relatives in the old country. Cooking was a passion for Joyce and she was widely known as an excellent cook specializing in yeast breads, Cornish pasty, and pies. She once created a winning recipe she lovingly named Blue Mounds Twists that took top honors in a locally televised competition. With her good friend, Barb Shickel of Mineral Point, she edited the Hope Lutheran Church Recipe Book that her family still treasures. In recent years she was thrilled to serve as an official pie judge in amateur, professional and commercial categories at the National Pie Baking Competition in Orlando, FL. Joyce loved to share her interests with others. At various times and various vocational Schools in both Wisconsin and Florida, she taught courses on cooking, quilting, calligraphy, and Rosemaling, a Scandinavian style of painting. Over the years, she also created beautiful pottery, ceramics, photography, and stained glass with which she filled her home. Joyce loved nature, and she could identify most plants and birds easily, but nothing surpassed her love of mountains. She longed to stand as close to the peaks as possible and look out on the vastness below. A lifelong rock hound, Joyce would stuff her pockets with rocks she found in these special places, amassing a large collection in the process. Because she believed travel and education were vital steps to achieve a better world she and George traveled extensively with their children throughout North America before they expanded their horizons and visited many foreign countries as a couple. After retirement, they both followed a lifelong dream. They sold their home and lived full time in an RV for seven years while traveling throughout the United States working as volunteers and seasonal employees in many of their treasured National Parks, State Parks, and National Forests. Joyce is survived by her children: Robert (Nancy Ward  Sears),  of Gig Harbor, WA, Richard (Julie Sutherland) of Arnold, MO, Ronald (Linda Brooks) of Madison, WI, and Rebecca (Kevin) Porter of Stoughton, WI. Her Grandchildren, US Army Major Tiffany (James) Arechederra, of Imperial, MO, Brooke Ferrell of New Berlin, WI, and Step-Grandchildren, Troy Sears of Gig Harbor, WA and James Pottorff of Tampa, FL. Brother, LaVerne (Joyce) Fahrni of Moore, OK, Sister-in-Law, Nancy (Charles) Ellefson of Spring Green, WI as well as many Nieces, Nephews, Godchildren, and a multitude of both lifelong and recent Friends. She was preceded in death by her husband of 52 years, George Ferrell in 2007, brothers, Larry Fahrni in 1954 and Lyle Fahrni in 2019, her parents, Fred and Florence Fahrni, parents-in-law, Mason and Margaret Ferrell, and Grandson, Aric Ferrell in 2012. A Graveside Service to be held at Graceland Cemetery, 800 Fair St., Mineral Point, WI on Friday July 3, 2020 at 11am. Pastor Margo Martens of Hope Lutheran Church to officiate.

The family of Joyce Ilene Ferrell created this Life Tributes page to make it easy to share your memories.

Send flowers to the Ferrell family.