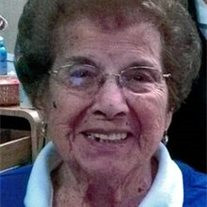 Mineral Point - Josephine R. Galle, age 98 of Mineral Point, passed away peacefully after a brief illness in the arms of her family while at Upland Hills Health on Tuesday, January 3, 2017. Josephine was the eighth child of eleven, born to Mary (Valente') and Joseph Galle on September 2, 1918. She attended St. Mary's Catholic grade school, and graduated from Mineral Point High School. Josephine then went to work at Burgess Battery in Mineral Point and continued to work there until it closed in the '60's. She then worked for Carnes Corporation in Verona until her retirement in 1986. Josephine was a life-long resident of Mineral Point and life-long member of St. Mary's-St. Paul's Catholic Church. Josephine was an avid Packer and Badger football fan. She enjoyed cooking, gardening, and spending time with family. Many Sunday dinners of spaghetti and meatballs were prepared and served at her kitchen table for family and friends. Josephine is survived by many nieces and nephews, and a special nephew and niece, Joe E. Galle, and Debbie (Scott) Soper, who she helped raise after the passing of her brother, Nickie. Josephine was preceded in death by her parents, brothers Vito, Nickie, Charlie, Joe, and Bruno; sisters Rose Leary, Lena Ceniti, Rosella DeSantis, Mary Galle, and Bernice Erb, and a special sister-in-law, Dorothy Galle. Josephine was the last Galle of the first generation of the two Galle families from Spadola, Italy who had settled in Mineral Point in the early 1900's. Josephine was proud of her Italian heritage and family traditions, A Mass of Christian Burial will be celebrated on Saturday, January 7, 2017 at 11:00 a.m. at Ss. MARY & PAUL CATHOLIC CHURCH in Mineral Point. Fr. Jim Leeser will officiate. Friends and relatives may call on Saturday from 9:30 a.m. until time of Mass at the church. Burial will be held in St. Paul's Cemetery. The family would like to extend a special thank you to the Mineral Point Rescue Squad, Dr. Fox and the staff at Upland Hills Hospital. Josephine was a loving and caring aunt to "all" of her nieces and nephews and a devoted sister. She will be sadly missed.

Mineral Point - Josephine R. Galle, age 98 of Mineral Point, passed away peacefully after a brief illness in the arms of her family while at Upland Hills Health on Tuesday, January 3, 2017. Josephine was the eighth child of eleven, born to... View Obituary & Service Information

The family of Josephine R. Galle created this Life Tributes page to make it easy to share your memories.

Send flowers to the Galle family.