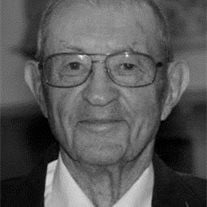 Mineral Point - Joseph H. Gevelinger, age 89, of Mineral Point, passed away on May 20, 2013 at the Mineral Point Care Center. He was born in Mineral Point on September 18, 1923, the son of Alphonse and Ann (Kieffer) Gevelinger. He graduated from Mineral Point High School in 1940. He married Rose Mary McDermott on October 14, 1946 at the Immaculate Conception Church in Truman. Together, they farmed and raised 9 children in the Mineral Point area. He was a life long member of St. Mary's Catholic Church and a member of the Knights of Columbus. He also served as the Town Chairman from 1978 - 1981. He enjoyed anything related to farming, including horses, livestock, farm history and antique farm equipment. His hobbies were reading, watching western movies and listening to country music. He enjoyed family gatherings and neighborhood friends. Joee is survived by his children, J. Thomas (Vickie) of Cuba City, Paul (Mary Jo) of Mineral Point, Jim (Terry) of Mineral Point, Joe (Sue) of Mineral Point, JoAnn (Jerry) Rowe of Decatur, IL, Rob (Denise) of Barneveld, Jean (Bob) Willer of La Crescent, MN, Steve (Rita) of Mineral Point, and Lori (Greg) Ewers of Mineral Point. He is further survived by 22 grandchildren and 4 great-grandchildren; his sister, Mary Stonner; his sisters-in-law, Helen McDermott, Roseanna Gevelinger, Eleanor Gevelinger and his brother-in-law, David (Sara) McDermott and numerous nieces and nephews. He is preceded in death by his wife Rose Mary in 2010, parents, brothers John, Bob, Ed, Paul, Ray and infant Joseph and brothers-in-law Hadley Stonner and Bob McDermott. A Mass of Christian Burial will be celebrated at 11:00 a.m. on Thursday, May 23, 2013 at Ss. MARY & PAUL CATHOLIC CHURCH in Mineral Point. Fr. Monte Robinson will officiate. Burial will be in St. Mary's Cemetery. A visitation will be held on Wednesday, May 22, 2013 from 4:00 -8:00 p.m. and on Thursday from 10:00 - 10:50 a.m. all at Ss. MARY & PAUL CATHOLIC CHURCH.

Mineral Point - Joseph H. Gevelinger, age 89, of Mineral Point, passed away on May 20, 2013 at the Mineral Point Care Center. He was born in Mineral Point on September 18, 1923, the son of Alphonse and Ann (Kieffer) Gevelinger. He graduated... View Obituary & Service Information

The family of Joseph H. Gevelinger created this Life Tributes page to make it easy to share your memories.