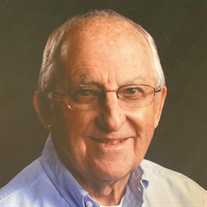 Dodgeville - Joseph William Esch, age 91, of Dodgeville, passed away peacefully with his family by his side on Thursday, March 25, 2021. Joseph Esch was born on March 11, 1930 in Dodgeville, the son of Valrie and Loretta Esch. He graduated from Dodgeville High School. He married the love of his life, Mary Eileen Brennan, in a double wedding with her identical twin sister on February 14, 1953. Joe spent the next several years of his life farming. He eventually changed careers and became a licensed insurance agent and started in the industry selling health and life insurance. In 1959, he started his own independent insurance agency, Esch Insurance, which is still family-owned to this day. He proudly celebrated the agency’s 60th anniversary in 2019. Prior to Joe’s retirement, he was very involved in the community. He was a member of the Dodgeville Lion’s Club, served on several boards, and was one of the founders of Dodgeville’s Farmers Appreciation Days. He was a lifelong member at St. Joseph’s Parish in Dodgeville. An avid golfer, hunter, fisherman, and euchre player - Joe loved spending time with family and friends. He rarely missed a morning going to coffee with the Rusty Zipper Club. His greatest enjoyment came from spending time in the ‘woods’, especially with his grandchildren. He was known for his homemade chocolate chip cookies, and rarely did anyone leave Joe’s Place without one of his famous old fashioneds. Joseph is survived by his children Susan Esch-Paull (Barry), Jacquie Zanck (Mick), and Sandy Fischer (Terry); his grandchildren Chelsea Meudt (Victor), Ryan Paull (Gloria), Casey Meudt (Brittany), David Paull (Bailey), Valerie Fischer, Peytan Zanck, and Bailey Fischer; his great grandchildren Nyla & Remi Perdue, and Beau Meudt; his sister Jean Esch-Theobald, brother Pat Esch, sister-in-laws Rita Esch, Carol Ann Deans, and Delores Brennan, and many nieces and nephews. He was preceded in death by his wife, Mary Esch; his parents, Valrie and Loretta Esch; in-laws, Matt and Myrtle Brennan; his sister Mary Reese, brothers Tom and Jim Esch, and numerous in-laws and other relatives. A Mass of Christian Burial for Joseph will be celebrated at 11:00 a.m. on Wednesday, March 31, 2021 at ST. JOSEPH’S CATHOLIC CHURCH in Dodgeville. A private burial will be held at a later date. Visitation will be held from 9:00 a.m. until 10:50 a.m. on Wednesday at the church. Father Tafadzwa Kushamba will officiate. The family would like to thank the doctors, nurses and staff at Upland Hills Hospice for the wonderful care and assistance. A special thank you to nurse, Ashley Tantillo. The family suggests that memorials be made to the Upland Hills Health Hospice Care or St. John’s Union Mills Catholic Church.

Dodgeville - Joseph William Esch, age 91, of Dodgeville, passed away peacefully with his family by his side on Thursday, March 25, 2021. Joseph Esch was born on March 11, 1930 in Dodgeville, the son of Valrie and Loretta Esch. He graduated... View Obituary & Service Information

The family of Joseph W. Esch created this Life Tributes page to make it easy to share your memories.

Send flowers to the Esch family.