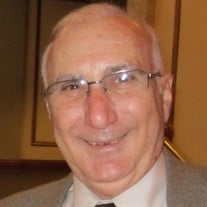 Mineral Point - Joseph Nicholas Ceniti passed away peacefully on Tuesday, November 30 2021. He was born on October 18, 1939 to Rocco and Lena (Galle) Ceniti. He was second of the eventually four children in the family. Joe learned early on that he didn’t want to do manual labor for a living. He valued education and attended the University of Wisconsin-Platteville and was the first in the family to graduate from college. Joe graduated with a degree in teaching. He later went on to earn his masters. Joe taught Language Arts and History in the Madison school district for over 30 years, retiring from Orchard Ridge Middle School. He made an impact on many students over the years as was evident by all the students who continued to reach out and send Christmas cards years after they were part of his class. After retiring, he helped his brother on the farm. Joe loved the lottery. Before the lottery came to Wisconsin, he would drive to East Dubuque every Saturday to get his tickets. Later when it arrived in Wisconsin, you could find him in the evening at Kwik Trip buying his tickets. Although Joe never married or had children of his own, he played an important part in the life of his nieces, nephews and great nieces and nephews. He helped them make every moment a learning moment, watched them after school and during summer breaks and helped create experiences that will last them a lifetime. He is survived by his brothers Rocco and Frank, nephews David Ceniti and Chris (Carol) Ceniti, nieces Jolena (Dean) Siegenthaler and Krista (Josh) Hinson and his beloved great nieces and nephew; Jason Ceniti, Ross and Maddie Siegenthaler and Tatum and Mila Hinson and many cousins. Joe was preceded in death by his father Rocco, his sister Kae, his mother Lena, sister-in-laws Florence and Mary Jo and many beloved Aunts & Uncles. A Mass of Christian Burial will be held on Friday, December 10, 2021 at 11:00 AM at Ss. MARY & PAUL CATHOLIC CHURCH in Mineral Point. Fr Michael Tarigopula will officiate. Burial will be in St. Paul's Cemetery. A visitation will be held on Friday from 9:00 until 10:50 AM at Ss. MARY & PAUL CATHOLIC CHURCH.

Mineral Point - Joseph Nicholas Ceniti passed away peacefully on Tuesday, November 30 2021. He was born on October 18, 1939 to Rocco and Lena (Galle) Ceniti. He was second of the eventually four children in the family. Joe learned early... View Obituary & Service Information

The family of Joseph Nicholas Ceniti created this Life Tributes page to make it easy to share your memories.