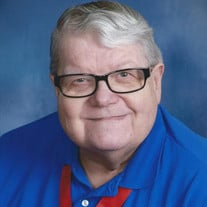 Dodgeville – Joseph Brian Pflieger went to be with his Lord and Savior peacefully on January 4, 2022 at the age of 74, surrounded by his family. Joe (or Brian as he was known in central Wisconsin) was born on July 16, 1947 in Wausau, Wisconsin, the second oldest son of Louis and Bernetta “Bee” (Wendorf) Pflieger. He graduated from Newman High School in Wausau in 1965. One of his first jobs after high school was in TV, where he performed in local commercials and was a cameraman and control room engineer. He later attended the School of Broadcasting for radio broadcasting which prepared him for a long career in radio. Joe married Nancy Lane in 1966, and they moved to Dodgeville in 1971 when he landed his first position in radio at WDMP in Mineral Point. He later moved on to work at WGLR in Lancaster for a combined total of 10 years in the radio industry. His specialty was in sales management and marketing where "he could sell anything to anybody.” He also conducted story research and wrote on-air copy for local interest stories. Wanting to expand his opportunities and provide for his growing family, Joe received an Associates Degree from Southwest Tech in Fennimore in computer programming. After receiving his degree Joe took an LTE project-based position at Sycare Systems in Dubuque. After that project ended, he moved on to a Database Management project for the State of Wisconsin Supreme Court system. This position started as a single project, and when the project was complete his supervisor's supervisor fought to keep him on staff. He worked there for 10 more years, converting the mainframe computing environment to a PC-based environment. Wanting to spend more time at home and less time commuting, Joe transitioned to working as a night auditor at two different hotels in the Dodgeville area. Joe was heavily involved with the Knights of Columbus where he was a 4th Degree active member of Assembly 2320. He held several offices including District Deputy and most recently served 12 years as Financial Secretary. Joe was also very active as chairman of the charity raffle and the annual spaghetti supper at St. Joe's church and a fixture at the Friday Night Fish Fry. Joe and Nancy divorced in 1994. Joe was remarried to Pamela (Sauder) in 1997, and welcomed Josh into the family as his stepson. Joe is preceded in death by his parents, second wife Pam, and his brother Frank Pflieger (Jacksonville, FL). He is survived by his first wife Nancy, his brother Chris Pflieger of Schofield, and his seven kids and nine grandkids: Roger (Teri) Pflieger and their two children Aiden and Bella, of Sparks, NV; Rob (Heather) Pflieger and their son Riley of Middleton; Angie (Joey) Anderson and their two children, Chloie and Tessa of Greenfield, OH; Anita (Scott) Philipps along with their four daughters Mackenzie, Kennedy, Lexi, and Emily of Hollandale; Roy (Amber) Pflieger in Dodgeville; Nanette (Justin) Pflieger-Kotte also in Dodgeville; and stepson, Josh Sauder in Black Earth. Joe was a Boy Scout in his youth and a Boy Scout leader for many years with Troop 357. In his spare time Joe liked crossword puzzles, playing card games such as euchre, clubs, and cribbage, as well as video games. Joe really enjoyed playing board games and Magic the Gathering with his family and friends. He had an extensive movie collection, was a big fan of the Green Bay Packers and was a master craftsman in the realm of "Dad jokes." The family would like to thank the staff at St. Mary's Hospital in Madison, the staff at Riverdale Heath Care Center in Muscoda, and the staff at Agrace Hospice in Fitchburg for their loving and professional care as Joe neared the end of his time on this Earth. "Live long and prosper" – Spock Public visitation will be held from 3:00 p.m. until 5:00 p.m. on Friday, January 21, 2022 at the GORGEN-McGINLEY & AYERS FUNERAL HOME in Dodgeville. Private family service will follow. Masks are required at all times inside the funeral home. In lieu of flowers, the family suggests donations to the Knights of Columbus or to the Feeding Friends charity. You can find out more on their websites at: Feeding Friends - https://www.dodgevilleumc.org/about-us/ministries/feeding-friends/ Knights of Columbus - https://uknight.org/Assembly.asp?A=2320

Dodgeville &#8211; Joseph Brian Pflieger went to be with his Lord and Savior peacefully on January 4, 2022 at the age of 74, surrounded by his family. Joe (or Brian as he was known in central Wisconsin) was born on July 16, 1947 in Wausau,... View Obituary & Service Information

The family of Joseph B. "Joe" Pflieger created this Life Tributes page to make it easy to share your memories.

Dodgeville – Joseph Brian Pflieger went to be with his Lord and...

Send flowers to the Pflieger family.