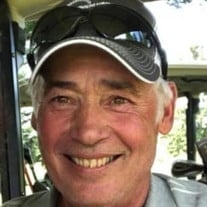 Dodgeville - John L. Yager, age 63, passed away peacefully at the family farm on Sunday, January 9, 2022. John was born on November 7, 1958 to Louie and Suzette Yager. He graduated from Mineral Point High school in 1977. Following school he worked at a farm repair shop for John Pronald where he learned to fix anything and everything. In 1980 he met his future wife, Yvonne Rochon. They were married on March 31, 1984 and together they farmed and raised a family on Yvonne’s family farm in rural Dodgeville for 37 years. They taught their children how to work hard and play hard. Throughout the years he enjoyed many different hobbies including canoeing, horseback riding, camping, playing cards, golfing, tractor pulling and most of all farming. He loved the farming community, being outdoors, working in the shop, and turning up dust in the fields. He made lots of friends along the way and was always up for shooting the breeze and a cold beer. He had a great sense of humor and the ability to deliver a timely one liner, which he perfected at deer camp every year. His greatest joy was time spent with family. He will be missed dearly by his wife, Yvonne of Dodgeville; his children, Brandon (Kimberly) Hendrickson, Kristin (Dan) Barr, Kelsey (Dan) Steffensmeier, Andy (Jen) Yager. 13 grandchildren; Emma, Ava, Jackson, Myra, Arlo, Maggie, Colton, Wyatt, Lane, Baby Boy S (on the way), Addy, Charlie, Jack, his mother, Suzette Yager (Schmelzer); his siblings, Steve (Mari) Yager, David (Linda) Yager, Wanda Yager (Chris), Julie (Lee) Speth; a sister-in-law Kelly Cody and many nieces and nephews. John was preceded in death by his father, Louie, brothers Dan and Tom, father-in-law Andy and mother-in-law Magdalen, and brother-in-law Paul. A private family service will be held with a celebration of John's life at a later date.

Dodgeville - John L. Yager, age 63, passed away peacefully at the family farm on Sunday, January 9, 2022. John was born on November 7, 1958 to Louie and Suzette Yager. He graduated from Mineral Point High school in 1977. Following school he... View Obituary & Service Information

The family of John L. Yager created this Life Tributes page to make it easy to share your memories.

Send flowers to the Yager family.