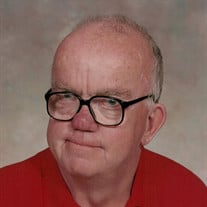 Ridgeway / Dodgeville - John Stanley Lucas “Big John”, died peacefully at Bloomfield Healthcare and Rehabilitation Center on Wednesday, June 16, 2021 at the age of 75. John was born on October 3, 1945 at St. Joseph’s Hospital in Dodgeville. He was the first-born son of Stan and Shirley (Schoenmann) Lucas. John was a proud member of the Class of 1964 from Dodgeville High School, where his beloved classmates remained lifelong friends. Many of those classmates, as well as numerous local friends kept in contact on a regular basis with visits and phone calls throughout John’s life. John was well known for his large stenciled greeting signs that he created for all occasions. The recipients of John’s articulate letters and notes of sympathy were a source of comfort. John will be remembered for his generosity, as he baked brownies and cookies and delivered them to friends, neighbors and his healthcare providers. He was the area weatherman, as John made numerous calls notifying those dear to him to take cover and be cautious driving when a storm was approaching. One of John’s passions was the fire department, he enjoyed listening to his scanner and knowing what was happening. John had the utmost respect for the local volunteer fire departments. He recognized each and every ambulance he would see and knew which city or village they were from. John was a loyal Packer, Brewer and Badger fan and he followed local sports teams at all levels. In his younger years, John was a member of St. Joseph’s Catholic Church of Dodgeville and after his move to Ridgeway he became a devoted member of St. Bridget’s Catholic Church of Ridgeway where he never missed a Sunday morning mass. Being an usher was great satisfaction for John. The 10:30 Sunday Parishioners became another family extremely important to John. John had various jobs over the years, at each of these places he made more lifelong friends. He was first employed by Hennessey Stockyards in Dodgeville, where he loved cleaning the semi’s. He was the “ambulance driver” at the Dodgeville Elementary School. He was known to transport an injured student on the playground to the office, making a siren sound along the way. Next, John was employed by Dick’s Supermarket in Dodgeville, where he earned the title of Ice Manager/Parcel Pickup Clerk. John was most happy when he was “riding shotgun” with various tow truck drivers and delivering furniture with the Ayers family. John is survived by his brother Jim Lucas of Globe, Arizona, a nephew Jason (Lance) Lucas of Minneapolis, Minnesota. A niece, Heather (Jesus) Rodriguez and great nephews Nicholas and Noah of Gilbert, Arizona. John was preceded in death by his parents, and sister-in-law Yolanda (Yolie) Valencia. A Mass of Christian Burial will be celebrated at 11:00 a.m. on Tuesday, June 22, 2021 at ST. BRIDGET’S CATHOLIC CHURCH in Ridgeway. Father Stephen Petrica will officiate. Burial will be held in St. Joseph’s Cemetery. Friends may call from 9:00 a.m. until 10:50 a.m. on Tuesday at ST. BRIDGET’S CATHOLIC CHURCH in Ridgeway. In lieu of flowers, memorials may be made to St. Bridget's Church 106 North St., Ridgeway, WI 53582. Thank you to the caring staff at Bloomfield Healthcare and Rehabilitation Center and Ingleside Communities of Mount Horeb. “There are friends, there is family and then there are friends that become your family”. On behalf of John, thank you for allowing him to be part of your family.

The family of John Stanley Lucas created this Life Tributes page to make it easy to share your memories.

Send flowers to the Lucas family.