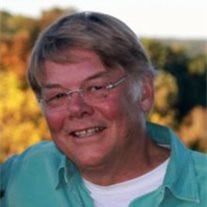 Dodgeville - John Bruce Lind, age 72, died at his home on June 1, 2014, just over a year after his brain tumor diagnosis. As always, he was surrounded by the family he loved so much. Born in Hibbing, Minnesota, October 3, 1941, he was raised in Southwest Minneapolis, moved to Billings, Montana for four years, and graduated from the University of Minnesota with a Bachelors of Science in business. In 1965, he married Carla Corty and they soon relocated to Decatur, Illinois and then to the Chicago suburb of Oak Park where they raised their family. He worked in agri-business for 30 years, the last 25 as a member of the Chicago Board of Trade, trading commodity futures. In 1996, John and Carla retired to their farm in rural Dodgeville, Wisconsin. He quickly became immersed in community service, becoming President of the local Habitat for Humanity chapter, and on the boards of Iowa County Area Economic Development Corporation, Dodgeville Historic Preservation Committee, Community Action Ventures, Shake Rag Alley Center for the Arts, and Hodan Center. In 1999, he was elected to the Dodgeville Town Board and served for five years. He also served on the Iowa County Board from 2004-2010. John and Carla purchased a home in Fredericksburg, Texas in 2002 where they began spending the winter months, making more friends, playing more golf and cooking more great food. Wherever he was, John loved life and inspired conversation. He will be remembered for his quick wit, unquenchable interest in people, his self-esteem, insight and great Italian cooking. He was happiest when friends and family were gathered around sharing stories, laughter, food and wine. He is survived by his wife of 48 years, Carla; his children, Christopher Lind (Carol Metcalfe), Jeremy Lind (Dana Limberg), and Brindi Melton; grandchildren, Cameron Lind, Elizabeth Lind, Zeke Limberg and Fischer Lind, all of the Chicago area; his sister Joanne Hohman (David) of Pepin, Wisconsin; brother Richard Lind (Mali) of Edina, Minnesota, brother-in-law William Corty (Diane) of Fredericksburg, Texas, sisters-in-law Cynthia Corty (Doug Rockne) of Denver, Colorado, and Julianne Corty of Minneapolis, Minnesota; his best friend for 40 years, David Clements (Cynthia), numerous nieces, nephews and scores of dear, dear friends and neighbors. He was preceded in death by his father Knute (Kenneth) Lind in 1960 and his mother Christine (Coduti) Lind in 2012. The family requests that in memory of John, gifts can be made to Upland Hills Hospice at 800 Compassion Way, Dodgeville, Wisconsin, 53533. A memorial service will be held at a later date.

Dodgeville - John Bruce Lind, age 72, died at his home on June 1, 2014, just over a year after his brain tumor diagnosis. As always, he was surrounded by the family he loved so much. Born in Hibbing, Minnesota, October 3, 1941, he was raised... View Obituary & Service Information

The family of John B. Lind created this Life Tributes page to make it easy to share your memories.

Send flowers to the Lind family.