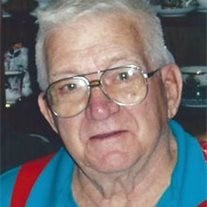 Dodgeville - John W. "Jack" Godfrey, age 88, of Dodgeville, passed away on Sunday, February 15, 2015 at Upland Hills Nursing and Rehab Center in Dodgeville. He was born on April 19, 1926, to Elmore E. and Rose Mary (Paradis) Godfrey, in Dodgeville. He attended school in Mineral Point. He married Anna Mae Cutler on January 27, 1948. They lived in Dodgeville all of their lives. John worked as a mechanic all of his life, opening his own shop in 1950, Jack's Skelly Service, losing the business to fire in May 1965, a few months later opening Jack's Texaco Service and running that business until semi-retiring in 1984, with the sale of the business to John, Jr. and working for him until the business closed in 1994. John also work part time at Wonder Wash and Lands' End. He was active in Service Organizations, Lions Club, and Odd Fellows, and was a 19 year retired member of the Dodgeville Fire Department and was very proud of the fact that he was part of Three Generations of service to the Department. He enjoyed fishing and his trips to the casino. John is survived by his children, Linda Walter, of Eagan, MN, John E. (Helen) Godfrey, of Dodgeville, Donna (Shane) Frenzel, of Monroe; 10 grand-children, Ben (Heather) Walter, Brad Godfrey, Brandon Godfrey, Brent Godfrey, Brittany (Luke) Thatcher, Josh Venden, Jake (Dawn) Venden, Angie Arians, Tony (Coleen) Frenzel, Kristin (Mike) Ladwig; 15 great-grandchildren; one great-great-grandchild; his sister, Jane Navickis, of Loves Park,IL; his sisters-in-law, Emma Godfrey, of Madison, WI, Lorraine Cutler, of Mineral Point; many nieces, nephews, other relatives and friends. He was preceded in death by his wife of 63 years, Anna Mae Godfrey, a daughter, Sandy Venden, his parents, Elmore and Rose Godfrey, his in-laws, Arthur and Ida Cutler, his brothers, Elmore George and William Godfrey, his sister, Catherine Cassidy, brothers-in-law, Robert Cassidy, Albert Navickis, Donald and Curtis Cutler, Joseph Spani, his sister-in laws, Dorothy Spani and Ann Cutler. Funeral services will be held at 11:00 a.m. on Saturday, February 21, 2015 at the GORGEN-McGINLEY & AYERS FUNERAL HOME in Dodgeville. Rev. Kenneth Schaub will officiate. Burial will be held in East Side Cemetery. Friends may call from 9:00 a.m. until time of services on Saturday at the funeral home.

The family of John W. "Jack" Godfrey created this Life Tributes page to make it easy to share your memories.