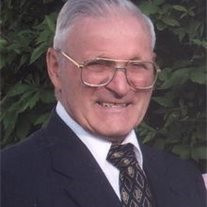 Mineral Point - John M. "Jack" Basting, age 82, of Mineral Point, passed away peacefully on Saturday, February 11, 2012, at the Mineral Point Care Center. He was born on October 11, 1929. He attended the Mineral Point Public and Catholic Schools. Jack was very active in sports; participating in football, basketball and baseball all 4 years of high school. Jack especially enjoyed playing alongside his "little brother" Franny. He graduated from Mineral Point High School in 1949. After high school he joined the U.S. Army and served in Korea from 1951 through 1953. Upon returning from Korea, Jack married the love of his life, Doris McDermott, on September 26, 1953. They settled down in Mineral Point and raised their 5 children together. Jack was involved in many civic and volunteer positions throughout his life. Some include being an alderman for many years, member of the Iowa County Airport Board, the Mineral Point Park Board, he served as President of the Mineral Point Booster Club, a member of the Knights of Columbus, he served on the Parish Council and was an active member of the St. Paul's/St. Mary's Catholic Church. Jack especially enjoyed coaching Little League and any other sports that his kids were involved in. He was a member of the American Legion Post 170 in Mineral Point for the past 58 years with whom he marched in the drill squad for years and made many long-lasting friendships. He was named the American Legion Outstanding Citizen in 1981. Additionally, Jack was a longtime member of the Association of Retarded Citizens and was always very supportive of his son, Mark. Jack worked his way through the ranks to eventually become a master plumber. He was a 50+ year member of the Local 75 United Association of Journeymen and Apprentices of the Plumbing and Pipefitting Industry of the United States and Canada. Jack was very proud to work on numerous large projects throughout his career. Some included the various hospitals in Madison, Camp Randall and the power station in Cassville, Wisconsin. Besides working on big projects, Jack also enjoyed helping anyone in the community with their plumbing needs. He was always a phone call away no matter the time of day! Jack always put his family first and took great pride in watching his children, grandchildren, nieces and nephews participate in sporting and other school events. His continued support of Mineral Point Athletics earned Jack and Doris the designation of Grand Marshalls for the 1995 Homecoming game. During the rare moment that he had any free time, Jack enjoyed sitting in the kitchen with a bowl of ice cream, which he frequently shared with one of the long-time family dogs, Laddie or Misty. He also loved listening to Patsy Cline or Lorrie Morgan while on his many trips back-and-forth from Madison for work. Jack is survived by his wife of 58 years, Doris; his children Colleen Weier, Maureen Kolwicz, Mark Basting, Teresa (Kent) MacGilvra, all of Mineral Point and John (Kelly Guess) Basting of Boyd, TX; his grandchildren, Jason (Kanndie) Basting, Erin (Scott) Berget, Emily and Jackson Basting, Dylan and Trevor MacGilvra; one great-granddaughter, Bella Basting. Jack is further survived by his sister, Louise Schwartz; his sister-in-law, JoAnne Basting; his sister-in-law, Eileen Cooney, and many other nieces, nephews and friends. Jack was preceded in death by his granddaughter, MacKenzie MacGilvra, and several other family members. A Mass of Christian Burial will be celebrated at 11:00 a.m. on Wednesday, February 15, 2012 at Ss. MARY & PAUL CATHOLIC CHURCH in Mineral Point. Fr. James Hinnen will officiate. Burial will be held in St. Paul's Cemetery with Military Graveside Rites accorded by the Mineral Point American Legion. Friends may call from 4:00 p.m. until 8:00 p.m. on Tuesday at the GORGEN FUNERAL HOME in Mineral Point and from 10:00 a.m. until time of Mass on Wednesday at the church. Jack was a loving husband, father, grandfather, great-grandfather, brother, uncle, friend and coach. He will be sadly missed by everyone whose heart he touched.

The family of John M. "Jack" Basting created this Life Tributes page to make it easy to share your memories.