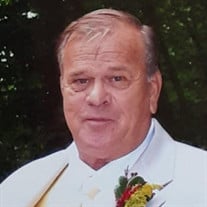 Not sure what to send?

Dodgeville – John P Hermanson, age 76, of Dodgeville, passed away at his home on Friday, January 7, 2022 with his family at his side after a brief but hard-fought battle with cancer. He was born December 24, 1945 to Harlow & Lenice (Dobson) Hermanson. John graduated from Mineral Point High School in 1965. After graduation he enlisted in the Marines, proudly serving 2 years. He was a member of Mineral Point V.F.W. Post #7629 and of Mineral Point D.A.V. #67. John followed many work paths in life: farm hand, Oscar Mayer, car salesman, Wick Buildings, over the road truck driver, construction work and dump truck driver. He owned a small Sealcoating (J & J) business for 35+ years that he was very passionate about. Following these paths, he developed many, many lifelong friends and relationships. John loved riding his motorcycle with family and friends; taking several trips out West and to the Florida Keys. During summer weather you could find him touring the local country side. In his earlier years during October and November, he would be headed West with friends on hunting trips. He took yearly road trips with his brothers as well as taking in the slot machines at the Casino. You could find him playing cards at either the Red Room or Jeffreys--he couldn't pass up a Euchre tournament. Of course, he enjoyed watching the Badgers & Packers. John was always willing to help where needed; maybe a family stranded due to car problems that needed a ride home or lending his time to help with a project. He was our 'go to' guy for anything that was needed. John is survived by his wife of 40 years, Diane; his children, Rob (Melissa) Hermanson of Oregon, Josh Hermanson & Tyler Hermanson of Dodgeville, John Hermanson Jr. (Christy) and Diana (Mark) Depriest, of Salt Lake City, Utah, Lisa Dennis of Evansville; 10 grandchildren; his siblings Jerry (Tammy) Hermanson of Madison, Mary (Richard) Duncan of Lancaster, Dave (Carol) Hermanson of Mineral Point, Wendy (Denis) Kitsemble of Van Wert, OH; his sisters-in-law Pauline Hermanson of Mineral Point, Kate Ihus of River Falls, Sue Boyer of Neillsville, Deb, (Edward) Mueller of Independence, WI and Carla (Bob) Phasey of Anderson, MO; his brother-in-law Dave (Ronda) Thiel of Columbus; as well as many nieces, nephews and friends. He was preceded in death by his parents, his sister Dorothy Petrie, brothers Gabriel Hermanson, Morris Hermanson & Steve Hermanson; his mother and father-in-law Gordon and Sarah Thiel, his brothers-in-law Pete Petrie, Gary Swendby and Larry Boyer, and his sisters-in-law Grace Hermanson, Karen Hermanson and Sandy Koch. John was a loving husband, father, grandfather and friend. He enjoyed a cup of coffee, sitting around the fire pit, telling jokes and listening to stories from others. His mischievousness will definitely be missed. Those that touch our lives are never really gone and stay in our hearts forever. RIP John-you have earned your wings. A Celebration of John's Life will be held from 1:00 p.m. until 5:00 p.m. on Saturday, May 21, 2022 at the RED ROOM in Dodgeville.

Dodgeville &#8211; John P Hermanson, age 76, of Dodgeville, passed away at his home on Friday, January 7, 2022 with his family at his side after a brief but hard-fought battle with cancer. He was born December 24, 1945 to Harlow & Lenice (Dobson)... View Obituary & Service Information

The family of John Hermanson created this Life Tributes page to make it easy to share your memories.