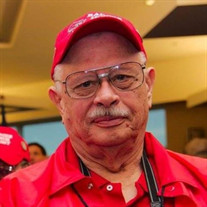 Dodgeville – John “Jack” Francis Cockroft, 78, of Dodgeville, peacefully passed away on January 24, 2022 after a difficult battle with Hemochromatosis. We are devastated and heartbroken by this loss and will feel the absence of our husband and father forever. He will be so greatly missed. Jack was born on March 20, 1943 to John Cockroft and Hilda Long in the bustling city of Richland Center. After Jack graduated from Lone Rock high school in 1961, he enlisted in the U.S. Army. Jack remembered his Army days abroad in Germany and at the Pentagon in Washington, D.C. with great fondness. He was very proud to be a veteran. In 1967, Jack met Karen Kay Kundert and they wed in 1968, going on to have two girls, Stephanie Ringelstetter and Vicky Cockroft. After happily retiring in 2004, Jack spent his time doing absolutely anything his heart desired and always said, “If I get bored, I’ll just take a nap.” Jack was predeceased by his parents and his sister Barbara Reed. He is survived by his wife, daughters, two grandchildren Jamie and Holly, his sister Alice Cockroft, his close nephews JR Reed and Tim Cockroft, his close friend Miles VanSlyke and many nieces and cousins. There are no events planned, as Jack did not wish to have services. Please consider making a donation to Agrace Hospice, 5395 E. Cheryl Parkway, Fitchburg, WI 53711, in his honor, as an alternative to flowers. Thank you Gorgen Funeral Home for guidance through this difficult time.

Dodgeville &#8211; John &#8220;Jack&#8221; Francis Cockroft, 78, of Dodgeville, peacefully passed away on January 24, 2022 after a difficult battle with Hemochromatosis. We are devastated and heartbroken by this loss and will feel the absence... View Obituary & Service Information

The family of John F. "Jack" Cockroft created this Life Tributes page to make it easy to share your memories.

Send flowers to the Cockroft family.