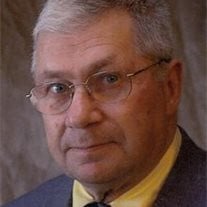 Dodgeville - John J. Brokish, age 85 of Dodgeville, passed away on Monday, April 17, 2017. He was born on May 15, 1931 in Dodgeville to Jacob and Gertrude (Meudt) Brokish. His mother passed away when he was just 8 days old. After his father remarried, he was raised by his father and second mother, Lorena (Koenig) Brokish. He attended grade school in a one-room schoolhouse. Following grade school, he first attended the seminary in Milwaukee, and graduated from Dodgeville High School in 1949. John married the love of his life, Anna Ernzen, on June 3, 1952. Together they raised a large family, and farmed. After 59 years of marriage, she predeceased him in 2011. A lifetime dairy farmer, he was an excellent steward of the land and animals. Always looking out for the best interests of farmers, he was very involved in various dairy organizations, holding positions on the boards of PMA & AMPI, now Foremost Farms. John was an avid Green Bay Packers fan, and seemed to bring them good luck. Even in their less impressive years in the 70's and 80's, when he was able to attend a game, they generally won. He also enjoyed fishing in his younger years, enjoyed playing cards, and reading, often having 2 or 3 books on the go at once. He loved to tease, and had a quick wit. You knew he was about to say something smart by the impish look on his face and glimmer in his bright blue eyes. John loved children, and even in the years he suffered nonstop headaches, seeing children could bring a big smile to his face. After years of constant headaches, then Parkinson's disease, and dementia following surgery six years ago, he is now free of pain and at peace in God's kingdom, and in the welcoming arms of his loving wife Anna. And he will be so happy to finally meet his mother. John was preceded in death by his parents, his wife Anna in 2011, daughter Rita in 1966, infant son in 1971, and his sister, Sister Ann Clare (Rita) Brokish in 2010. He is survived by 10 children: Ann Marie (John) Davis of Joliet, IL; Jane Brokish of Madison; John (Brenda) Brokish of Cuba City; RoseMarie (Tim) Dunbar of Monona; Tony Brokish of Dodgeville; Chuck (Kara) Brokish of Poynette; Andy Brokish of Dodgeville; Dick (Michelle) Brokish of Hollandale; Theresa (Carl) Caylor of Iron Mountain, MI; and Tim (Beth) Brokish of Waupaca, as well as 15 grandchildren and 4 great grandchildren. He is also survived by six brothers: Carol (Maleta), Larry (Virginia), Ray (Marie), Joe (Nancy), Harry (Linda) and Jerry (Ginny), and 8 sisters: Sister Evelyn Brokish, Lorena (George) Macholl, Margie Krakow, Mary (Howard) Shear, Genny (Marv) Johnson, Sharon (Frank) Nason, Marcia (Chuck) Devendorf, and Doris (Tim) Trout. Thank you to Dr. Bishop for his care over many years, and to Dr. Grunow and Atrium Post Acute Care of Mineral Point for their care in recent years. A Mass of Christian Burial will be celebrated at 11:00 a.m. on Saturday, April 22, 2017 at ST. JOSEPH'S CATHOLIC CHURCH in Dodgeville. Monsignor Daniel Ganshert will officiate. Burial will be held in St. Joseph's Cemetery. Friends may call from 4:00 p.m. until 7:00 p.m. at the GORGEN-McGINLEY & AYERS FUNERAL HOME and from 9:30 a.m. until 10:30 a.m. on Saturday also at the funeral home. In lieu of flowers, contributions may be made to National Parkinson Foundation, or Alzheimer's & Dementia Alliance of Wisconsin.

Dodgeville - John J. Brokish, age 85 of Dodgeville, passed away on Monday, April 17, 2017. He was born on May 15, 1931 in Dodgeville to Jacob and Gertrude (Meudt) Brokish. His mother passed away when he was just 8 days old. After his father... View Obituary & Service Information

The family of John J. Brokish created this Life Tributes page to make it easy to share your memories.

Send flowers to the Brokish family.