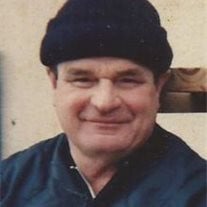 Bettendorf, IA / Mineral Point - John W. Benson, age 80, passed away suddenly on Saturday, September 20, 2014 at his home in Bettendorf, Iowa. John, also known as Bill or Red, was born to John and Dorothy (Jelliffe) Benson on January 22, 1934 in Mineral Point. He graduated from Mineral Point High School in 1954. After graduation, he joined the US Army and served in Germany from June 1954 to June 1957. He then worked at John Deere in Dubuque, Iowa for 30 years, retiring in 1988. John is survived by brothers, Claire, Jim (Peggy), Gary (Shirley);his sister, Evaline. John was preceded in death by his parents, his sisters, Lulu Belle (Bob) and Marion, his brothers, Gene, Marlin (Cheryl), Malvern, Warren (Virginia) and his nephews, Micheal and Christopher. A Mass of Christian burial will be held at 11:00 a.m. on Thursday September 25, 2014 at Ss. MARY & PAUL CATHOLIC CHURCH in Mineral Point. Father Monte Robinson will officiate. Burial will be held in St. Paul's Cemetery. Visitation will be held from 10:00 a.m. until time of Mass on Thursday at the church. A lunch will be served following interment.

The family of John W. Benson created this Life Tributes page to make it easy to share your memories.

Send flowers to the Benson family.