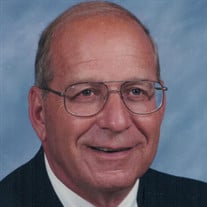 Dodgeville - Joel “Duke” Donahue, age 83, passed away peacefully on August 28, 2020 surrounded by his loving family following a long battle with Frontotemporal Dementia, (FTD). Duke was born on August 19, 1937 to Charles and Gen Donahue in LaCrosse, Wisconsin. He attended school in LaCrosse and graduated from Aquinas High School in 1955 and married his high school sweetheart Louise Giraud on June 1 ,1957. While growing up, Duke developed a very strong passion for baseball. After high school, he played for several home talent and fast pitch softball teams. A lot of date nights were spent at a ball field with Louise cheering from the stands. In 1957 he was selected as the outstanding fast pitch softball player in the LaCrosse area being awarded the Claire Raith Trophy. Duke’s ability on the baseball field led to a contract offer from the St. Louis Cardinals in 1959. However, he chose family over baseball. After graduation he went to work for Thorpe Finance. In 1958 they moved to Darlington as he was promoted to Manager of the Thorpe office. In 1961, another transfer with his job brought him to Dodgeville. In 1970, Duke became the manager of the Richland Center Savings and Loan in Dodgeville. After that, he eased into retirement working at Lands’ End. Duke continued to be active in sports with softball and baseball. He was a member of the Dodgeville Home Talent team for several years and was on the championship team in 1972. He was an outstanding baseball player and was known to hit a “few home runs”. He continued to play baseball until he was 39 yrs old. Duke continued his love of baseball through his sons’ which led to him coaching teams at the “Stars of Tomorrow” baseball tournaments in LaCrosse. This tournament was organized by a former baseball coach of his, Kooch Carroll. It was important to Duke that all the Little League teams had uniforms so he led a fundraising effort to make that happen. Duke was an avid golfer and darn good at it. He belonged to the Dodge-Point Country Club - some would say the golf course was his second home. He was proud of his 8 hole-in-one’s. His golf team won a qualifying tournament which allowed them to play in an NFL Alumni Tournament in Phoenix, Arizona. Duke always enjoyed playing city rec basketball. In later years he would referee high school and city rec basketball. He was often known to stop at half court and let the younger referees do the full court running. He did a lot of joking and harassing with the players. Duke had a love for the trumpet that started in grade school. He was a member of the National Champion Commanders Drum and Bugle Corp from LaCrosse. He continued to play trumpet in the Dukes of Dairyland Band , playing big band/dixie/jazz music at the Don Q Inn, Dodge Point Country Club and supper clubs in Madison. In his later years, he was very honored to play taps for military funerals. He was a charter member and past president of the Lion’s Club. Duke is survived by his loving wife of 63 years, Louise; his children Deb (Dan) Rosenthal; Scott Donahue; Jeff Donahue; Ann (Jim) Swenson; and Patti Jasinski; twelve grandchildren; 2 step granddaughters; 5 great grandchildren; and 6 step great grandchildren. He was preceded in death by his parents and his infant granddaughter Mara. A Memorial Mass of Christian Burial will be celebrated at 11:00 a.m. on Saturday, September 5, 2020 at ST. JOSEPH’S CATHOLIC CHURCH in Dodgeville. Fr. Tafadzwa Kushamba will officiate. Inurnment will be held in St. Joseph’s Cemetery. Family and friends may call from 4:00 p.m. until 7:00 p.m. on Friday at the GORGEN-McGINLEY & AYERS FUNERAL HOME in Dodgeville. Due to Wisconsin’s public health mandate, masks are to be worn during the duration of your visit inside of the funeral home and that you practice proper social distancing guidelines. In lieu of flowers, donations can be made to the Alzheimers and Dementia Alliance of Wisconsin and Upland Hills Hospice. The family would like to thank Dr. Emily Jewell and staff, Christian Servants and Upland Hills Hospice for their compassion and care for Duke.

The family of Joel C. "Duke" Donahue created this Life Tributes page to make it easy to share your memories.

Send flowers to the Donahue family.