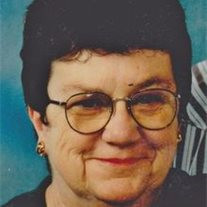 Livingston / Mineral Point - Joan E. Hildreth, age 75, of Livingston, passed away on Monday, March 9, 2015 at Upland Hills Nursing & Rehab Center in Dodgeville. She was born on July 4, 1939, the daughter of Francis and Henrietta (Griffiths) Cocking. She graduated from Mineral Point High School in 1957. She married George C. Hildreth on October 10, 1959. Joan worked at the General Telephone Company in Mineral Point, and also worked as a waitress and tended bar in several business places in Mineral Point. She later worked at Amphenol Controls and retired from Lands End after 27 years. She enjoyed coffee clutches, visiting with her grandchildren, great-grandchildren and making trips south to the casino. Joan is survived by her five children, George Jr. (Roberta) of Montfort, Paul (Linda) of Mineral Point, Barb of Cassville, Rod (Donata) of Mt. Horeb and Mike (Beth) of Byron, IL; 15 grandchildren; 11 great-grandchildren with one on the way; her sister Sandy Whitford of Mineral Point; two sisters-in-law, Kathy (Bruce) Carls of Oregon and Della Mae Stude of Madison; her brother-in-law, Leonard (Carla) Hildreth, of Madison; several nieces, nephews, relatives and friends. She is also survived by a special friend Gloria Gilbertson of Lamont, WI and her two pet dogs Molly and Jill. She is preceded in death by her parents, her husband George on August 23, 2008, her mother and father-in-law Howard and Elizabeth Hildreth, her son Keith, her brother Frank Cocking; her sister-in-law Jean Ann Hildreth and her brother-in-law Jim Whitford. Funeral Services will be held on Thursday, March 12, 2015 at 11:00 a.m. at the FIRST UNITED METHODIST CHURCH in Mineral Point. Pastor Becky Henke will officiate. Burial will be held in Graceland Cemetery. A visitation will be held on Wednesday, March 11, 2015 from 4:00 until 8:00 p.m. at the GORGEN FUNERAL HOME in Mineral Point, and on Thursday from 10:00 a.m. until 10:50 a.m. at the church.

The family of Joan E. Hildreth created this Life Tributes page to make it easy to share your memories.

Send flowers to the Hildreth family.