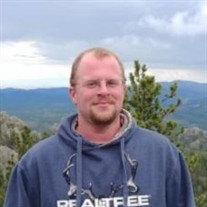 Dodgeville – Jesse Burdette Monigold, age 41, of Dodgeville, WI died on Wednesday, July 28, 2021 of a motor vehicle accident. Jesse was born on February 5, 1980 to David Alan Monigold and Barbara Ann (Clay) Monigold of Warren, IL. He graduated from Freeport High School in 1998 where he was active in track and field and small engine repair. He went on to Highland Community College for coursework in Automotive. Jesse married his wife, Lindsey Ann (Reynolds) Monigold in March of 2004. Jesse was a father of two daughters Kyleigh and Chloe and a step-father to Lindsey's daughter Samantha. Jesse worked at various automotive shops throughout the years, most recently he worked for Full Boar in Dodgeville, WI. Jesse had an amazing work ethic and could fix anything that needed fixed. Jesse loved the outdoors and his family. They enjoyed ATVing, boating, camping, fishing and having fun at the beach. He was outgoing and loved by many. He had a personality that drew people in and he would give you the shirt off his back if you needed it. Jesse is survived by his wife, Lindsey Ann (Reynolds) Monigold of Dodgeville; his daughters Kyleigh Jo Monigold and Chloe Jesse Monigold, Samantha Lynn (Brad) Conley; his grandson Hudson Robert Conley; his parents David and Barbara (Clay) Monigold; his brothers, Benjamin Monigold, Justin (Julie) Monigold, Jason (Emily) Monigold; his sisters Tanya (Nick) (Monigold) DeJong, Kimberly (Jake) (Monigold) Kudlacik; 8 nephews and 7 nieces; his grandmother Phyllis (Thomas, deceased) (Schult) Monigold. A Celebration of Life for Jesse will be held on Saturday, August 7, 2021 from 10:00 a.m. until 10:00 p.m. at GOVERNOR DODGE STATE PARK AMPHITHEATER, 4175 WI Hwy. 23, Dodgeville, WI 53533.

The family of Jesse Burdette Monigold created this Life Tributes page to make it easy to share your memories.

Send flowers to the Monigold family.