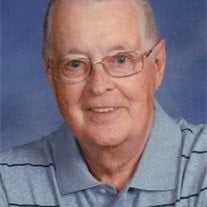 Mineral Point - Jerry Lee Dolphin, age 80, of Mineral Point left this world but not our hearts on Saturday, May 5, 2018, at Bloomfield Manor Care Nursing Home. Jerry was born August 9, 1937 in Platteville, WI. Jerry graduated from Platteville High School and then joined the Air Force in December of 1956. He married Brigitte Schuh on July 3, 1959. They settled in Mineral Point in October of 1959. They had four children, Mike, Thomas, Debra and Scott. Jerry started his career at General Telephone as an Engineer in 1959. He transferred to Bloomington IL. in 1981 and retired there in 1992. He coached Midget and Little League baseball and started the Mineral Point Wrestling Club and was President from 1972-1979. Jerry and Brigitte were inducted into the Allen Bauman Wrestling Hall of Fame in 2001. They finally moved back to Mineral Point in 2009. Jerry loved wrestling, softball, golf and was a huge Packer, Brewer and Badger fan. He is survived by his wife of 58 years, Brigitte, along with his 4 children, Mike (Jeanne) Dolphin of Schaumburg, Thomas (Vicki) Dolphin, Debra Dolphin-Jacobs, Scott Dolphin all of Mineral Point. He has 11 grandchildren, Trent Jacobs, Sara Greene, Tara, Mark, Tyler, Kayla, Kyle, Morgyn, Allison, Alec and Aryn Dolphin, along with 10 great grandchildren. He has 3 brothers, Larry (Jane) Dolphin, Ron (Melva) Dolphin, Steve (Teresa) Dolphin, and 5 sisters, Jeanie Calvert (Chuck), Nancy Bockhop (Gary), Elaine Uren (Dick), Carol Hermanson (Dave), Beth Gribble (Richard). He is preceded in death by his parents Ted and Melva Dolphin, his sister Lou Dobson and an infant grandson, Thomas J. Dolphin. A Memorial Service will be held at 11:00 a.m. on Saturday, May 12, 2018 at FIRST UNITED METHODIST CHURCH, 400 Doty Street, Mineral Point, where Military Rites will follow the service. Rev. Gerhardt Miller will officiate. Friends may call from 4:00 p.m. until 8:00 p.m. on Friday and from 10:00 a.m. until 10:50 a.m. on Saturday at FIRST UNITED METHODIST CHURCH. Inurnment will be held at Kirkpatrick Cemetery at a later date. In lieu of flowers donations to Upland Hills Health Hospice, Iowa County Cancer Coalition and Bloomfield Manor Care would be appreciated.

The family of Jerry L. Dolphin created this Life Tributes page to make it easy to share your memories.

Send flowers to the Dolphin family.