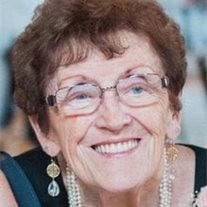 Mineral Point - Jeannine A. Walsh, age 81, of Mineral Point passed away unexpectedly on Saturday, May 13, 2017, at her home. Jeannine was born on January 4, 1936, the daughter of David and Ann (Ryan) Evans. She graduated from Ridgeway High School in 1954. On June 19, 1956, she was united in marriage to Gerald Walsh at St. Bridget's Catholic Church in Ridgeway, WI. Together they created Walsh Oil Company which she helped manage for 47 years. In addition, she was proud to work at Land's End for over 20 years. Jeannine was a member of the St. Mary's/St. Paul's Catholic Church where was also a member of the Council of Catholic Women. She especially enjoyed helping at various church dinners for many years. She was also a member of the American Legion Auxiliary. It was through her kids sports, her years at Land's End and church dinners that she gained many dear friendships which she so treasured. Jeannine also had a love of sports and took special enjoyment in following the Wisconsin Badger Football and Basketball teams. Jeannine's pride and joy was her family. She is survived by her six children, Jeff (Kathie) of Elkhorn, NE, Jim (Lynn) of Dousman, Mary Jo (Steve "Coogie") Coogan of Cottage Grove, Julie (Jerry) Cassidy of Mineral Point, Jill (Gary) McGuire of Mineral Point and Jay (Cory) Walsh of Verona. She is further survived by her 13 grandchildren and 4 great grandchildren, Dana (Joe) Bailey and children Hunter and Mara, Trevor (Hayley) Coogan, Tyler (Kelsey) Walsh, Jalissa Cassidy and son, Jaden, Jora (Adam) Crist and daughter Cassidy, Carlina (Trevor Duckart) Coogan, Devan (Alyssa Thompson) Walsh, Ryan (Abby Studinger) McGuire, Kalea (Anthony McGuire) Walsh, Jeri Jo Cassidy, Caiti McGuire, Jori Walsh and Abby Walsh. Also surviving Jeannine are her siblings Sharon (Dave) Sutter, David (Jean) Evans, Ellen Fischer and her sister-in-law, Betty Walsh. She was preceded in death by her parents, her husband Gerald in 2008, her father and mother-in- law, Vincent and Catherine Walsh along with her brothers and sister-in-law, Lavern Johnson, Ronald Fischer, James Walsh, Tom Walsh and Charles and Margaret "Peggy" Murphy. A Mass of Christian Burial will be held on Friday, May 19, 2017 at 10:30 a.m. at Ss. MARY & PAUL CATHOLIC CHURCH in Mineral Point. Fr. Jim Leeser will officiate. Burial will be in St. Paul's Cemetery. A visitation will be held on Thursday, May 18, 2017 from 4:00 until 8:00 p.m. and from 9:30 until 10:20 a.m. all at Ss. MARY & PAUL CATHOLIC CHURCH. The family would like to thank all her special neighbors, especially Rich and Karla Vogel for their kind love and support throughout the years. In lieu of flowers, please consider a memorial to St. Mary & Paul's Catholic Church or Hodan Center of Mineral Point, WI.

Mineral Point - Jeannine A. Walsh, age 81, of Mineral Point passed away unexpectedly on Saturday, May 13, 2017, at her home. Jeannine was born on January 4, 1936, the daughter of David and Ann (Ryan) Evans. She graduated from Ridgeway High... View Obituary & Service Information

The family of Jeannine A. Walsh created this Life Tributes page to make it easy to share your memories.

Send flowers to the Walsh family.