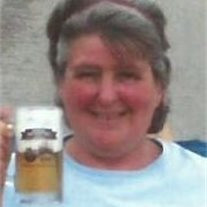 Mineral Point / Hollandale – Janet L. "Pippi" Anderson, age 57, of Mineral Point, beloved wife, mother, grandmother and sister, passed away unexpectedly on Friday, May 24, 2013. She was born on September 13, 1955, a daughter of Robert and Anna Marie Rickey. She graduated from Barneveld High School in 1973. She married Steve Anderson on September 7, 1974. She enjoyed farming side by side with her devoted husband and companion. She recently retired to enjoy her life as a devoted grandma to Aries. She also enjoyed her weekends away, Sunday Green Bay Packer parties, bowling and family time with a cold beer. Janet will be missed by her husband, Steve; her son, Matt (Tiffany) Anderson; her special granddaughter, Aries; her sisters, Sue Rickey, Julie Rickey, Sally (Jerry) Olson; her brother, Allen Rickey; her sister-in-law, Pam Anderson; her brothers-in-law, Ron (Laurie) Anderson and Rich (Kandye) Anderson; other relatives and friends. She was preceded in death by parents and her father and mother-in-law, Otto and Doris Anderson, and her special dog, Lucky. A Memorial Mass of Christian Burial will be celebrated at 11:00 a.m. on Wednesday, September 29, 2013 at ST. PATRICK'S CATHOLIC CHURCH in Hollandale. Fr. Thomas Gillespie will officiate. Friends may call from 4:00 p.m. until 8:00 p.m. on Tuesday at the GORGEN-McGINLEY & AYERS FUNERAL HOME in Dodgeville and from 10:00 a.m. until time of Mass on Wednesday at the church.

The family of Janet L. Pippi" Anderson created this Life Tributes page to make it easy to share your memories.