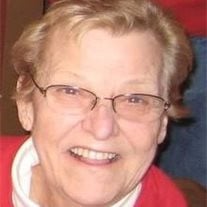 Dodgeville - Janet L. Hess, age 78, of Dodgeville, passed away peacefully on Thursday, November 14, 2013, at Bloomfield Manor in Dodgeville, WI surrounded by family. Janet was born on August 13, 1935 to Harold and Dorothy Pittz in Dodgeville, WI. She graduated from Dodgeville High School in 1953. After graduation she took a secretarial position for the Dodgeville School district this is where she met the love of her life Frank Hess. They were united in marriage on June 2, 1956 at St. Joseph's Catholic Church. Janet and Frank moved to Sparta for a short period of time but returned to Dodgeville when they opened their own business. Janet was homemaker as well as helping Frank in the family business. She later partnered with her sister Mary to open their own business, in 1972, Marjan's, in the basement of Hess Home Furniture. Later this business moved down the street to the home where her Dad, Harold, once operated a hardware store. Janet loved crafts and quilting and enjoyed teaching her talents to others. Janet very much loved watching her Badgers and Packers especially with her friends and family. Times spent with her friends and family were what was most important to her. Janet is survived by her 5 children, Gerianne (Curt) Fellows, of Dodgeville, Jody (Doug) Evans, of Dodgeville, Kristen Quick, of Wisconsin Rapids, Mark (Christine) Hess, of Dodgeville, Jean Hilton, of South Elgin, IL; her son-in-law Jason Cullen, of Dodgeville; her 11 grandchildren, Mark and Taryn Fellows, Jessa and Nathan Quick, Justine, Lindsay and Emily Hess, Haydn and Elise Hilton, Danni Hess and Jackson Cullen; one great grandchild, Evan Otto Gould; her sisters, Carol (Dennis) Hessner, Myrna (Paul)Thuli and Mary (Bob) Kratchowill; as well as other dear friends and relatives. Janet was preceded in death by her husband Frank, her parents Harold and Dorothy Pittz, two daughters, Kay Lynn Hess and Sandy (Hess) Cullen, two son-in-laws, Andy Quick and Steve Hilton and her father and mother-in-law, Frank and Florence Hess. A Mass of Christian Burial will be celebrated at 11:00 a.m. on Monday, November 18, 2013 at ST. JOSEPH'S CATHOLIC CHURCH in Dodgeville. Father Patrick Wendler will officiate. Burial will be held in St. Joseph's Cemetery. Friends may call from 2:00 p.m. until 6:00 p.m. on Sunday at the GORGEN-McGINLEY & AYERS FUNERAL HOME in Dodgeville.

The family of Janet L. Hess created this Life Tributes page to make it easy to share your memories.

Send flowers to the Hess family.