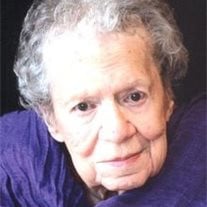 Mineral Point - Jane Ellen Rasmussen, age 96, left on Monday, December 17, 2012 to join her husband, Homer, to celebrate Christmas with him and the angels. Ellen was born the youngest of 9 children to John and Mary Jane Hildreth on July 10, 1916 in Mineral Point, Wisconsin. She attended Mineral Point High School until she had to leave school when the depression began. She later returned to school @ 1980 and received her GED inside of 8 weeks and went on to mentor many other students working towards their diploma in Oregon, Wisconsin. She married John Homer Rasmussen in Rockford, Illinois on September 24, 1933. They resided in Mineral Point all their life together. She helped Homer with the family business, J. Homer Rasmussen & Son Grain. Ellen also sold Avon for many years as well as working later years Burgess Battery, Amphenol, Advanced Transformers and Solko Crystal in the Mineral Point/Dodgeville areas. Ellen later moved to the Madison area following the death of her husband in 1974. After retiring in 1978, she volunteered for many years at the Central Wisconsin Center/Central Colony as a foster grandparent assisting with patients' daily needs. She later worked as a foster grandparent at Dodgeville Schools for 12 years. In addition to living in Mineral Point after her initial retirement, she'd lived in Brodhead for several years and in Mauston for 14 years after retiring from the Dodgeville Foster Grandparent program. In 2010 she moved to Upland Hills Nursing Home in Dodgeville, Wisconsin. Ellen is survived by her son, Mark (Alys) Rasmussen, Tama "Tammy" Foust (Dave Klingbeil), Antoinette "Toni" (Irv) Pieczynski; 13 grandchildren; 25 great-grandchildren; 3 step great-grandchildren; and 1 great-great grandchild. She was preceded in death by her husband, J. Homer, daughters Barbara Kerwin, Carol Wolenec-Michael, and infant Teresa (Terry), sisters (and brothers-in-laws) Irene (Jack) Lynch, Carolyn (Warren) Munson, Gertrude (Ivan) Agnew, Leone (James) Pederson, Lillian (Charles) Friedli, Oliviene "Jean" (Danny) Benson, Viola (George) Griffin, and a brother, Tom (Leone) Hildreth, and son-in-law Dwight Foust. Funeral Services will be held at 11:30 a.m. on Friday, December 21, 2012 at the GORGEN FUNERAL HOME in Mineral Point. Visitation will be held from 9:30 a.m. until time of services on Friday at the funeral home. A luncheon follow at St. Mary's Church School gym. Burial will be in St. Paul's Cemetery at a later date. Many, many thanks to Dr. Greishaber and all the wonderful staff at Upland Hills Nursing and Rehab. Who were so kind and caring to mom.

Mineral Point - Jane Ellen Rasmussen, age 96, left on Monday, December 17, 2012 to join her husband, Homer, to celebrate Christmas with him and the angels. Ellen was born the youngest of 9 children to John and Mary Jane Hildreth on July 10,... View Obituary & Service Information

The family of Jane Ellen Rasmussen created this Life Tributes page to make it easy to share your memories.

Send flowers to the Rasmussen family.