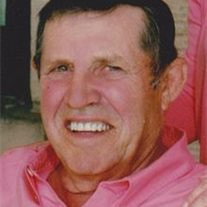 Mineral Point - James H. Schweitzer, 78, passed away peacefully on Wednesday, October 12, 2016 at Upland Hills Health in Dodgeville after a long illness. He was born on September 4, 1938 the son of Henry and Nina (Heins) Schweitzer. Jim married Mary Ludlum on July 14, 1961 at St. Mary's Catholic Church in Mineral Point. They lived on and worked the family farm until he was no longer physically able. He was a member of Ss. Mary & Paul's Catholic Church. Jim is survived by his wife Mary and four children Mark (Vicky) of Mineral Point, Renee Brunkow of Darlington, Kent (Nichole) of Appleton, and Lisa (Kurt) Eggers of Mineral Point; eight grandchildren Jodi and Shane Schweitzer, Robert "Bo" and Tyler Brunkow, Ashley and Megan Schweitzer, and Kayla and Lane Eggers. Jim leaves behind a sister Lorraine Hennessey of Dodgeville, a sister-in-law Lisa Schweitzer of Platteville, his in-laws; Clarita (Ron) Scott, Terry (Jim) Gevelinger, Jack (Marilyn), Bob (Marlene), Tom (Kate), Jim, Bill (Jackie), Chuck (Leah), and Kenny (Sue) Ludlum; also many nieces, nephews and his very special dog Katie. Jim is preceded in death by his parents, his father and mother-in-law Willard and Agnes Ludlum, a brother Wayne in 1994, brothers-in-law Patrick Hennessey and Tom McKee, and a sister-in-law Sheila Ludlum. A Memorial Service will be held on Monday, October 17, 2016 at 11:00 a.m. at Ss. MARY & PAUL CATHOLIC CHURCH in Mineral Point. Fr. Jim Leeser will officiate. Burial will be in St. Mary's Cemetery. A visitation will be held on Sunday, October 16, 2016 from 3:00 until 7:00 p.m. and on Monday from 10:00 until 11:00 a.m. all at Ss. MARY & PAUL CATHOLIC CHURCH. In lieu of flowers memorials may be given to the family and donations will be made in Jim's name. A special thank you to the 1st floor staff and Hospice nurses at Upland Hills Health and Amy Tibbits for the years of great care.

Mineral Point - James H. Schweitzer, 78, passed away peacefully on Wednesday, October 12, 2016 at Upland Hills Health in Dodgeville after a long illness. He was born on September 4, 1938 the son of Henry and Nina (Heins) Schweitzer. Jim married... View Obituary & Service Information

The family of James H. Schweitzer created this Life Tributes page to make it easy to share your memories.

Send flowers to the Schweitzer family.