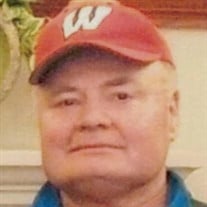 Dodgeville - James Robert Aurit, age 73, of Dodgeville, died peacefully at the family farm on Friday, September 11, 2020. Jim was the eldest child born to Robert and Berniece (Eustice) Aurit on February 2, 1947. He loved being on the farm and... View Obituary & Service Information

The family of James R. "Jim" Aurit created this Life Tributes page to make it easy to share your memories.

Send flowers to the Aurit family.