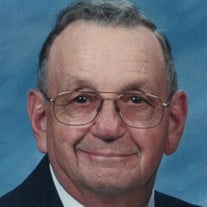 Dodgeville – James Robert Philipps, age 87, passed away peacefully surrounded by his loving family on Saturday, January 19, 2019 at Crestridge Assisted Living in Dodgeville. Jim was born on March 16, 1931 in Dodgeville to Frank and Pearl Philipps. Jim enlisted in the U.S. Army and served in the Korean War. When he returned from service, he married his high school sweetheart, Carol Skogen on April 18, 1953. Jim took over Philipps Distribution Company from his father, where he was a Hamm’s and Miller distributor. He then began Philipps All Star Dairy, becoming a wholesaler and delivering dairy products to local homes and businesses until he retired. Jim served his community as a firefighter for 25 years. He spent his retirement volunteering at St. Joseph’s School. Jim was an avid golfer and played many rounds with family and friends. In 2016, he participated in the Badger Honor Flight. Jim is survived by his wife of 65 years Carol; their children Marcia (Dave) Hyzer, Cathy (Scott) Thomas, Deb (Larry) Roth, Frank (Barb), Joe (Mary), Tom (Julie), Mike (Mary), Pat (Allison); 18 grandchildren; 21 great grandchildren; and his brother Paul. He was preceded in death by his parents, his son Steven, his brothers Francis and Vincent and his sister Geri Peterson. A Mass of Christian Burial will be celebrated at 11:00 a.m. on Thursday, January 24, 2019 at ST. JOSEPH’S CATHOLIC CHURCH in Dodgeville. Father Tafadzwa Kushamba will officiate. Burial will be held in St. Joseph’s Cemetery with Military Graveside Rites accorded by the Dodgeville Area Veterans. Friends may call from 9:30 a.m. until time of Mass on Thursday at the church. In lieu of flowers, contributions can be made in Jim’s name to St. Joseph’s Catholic School, Agrace Hospice or a charity of your choice. The family would like to thank Agrace Hospice and Crestridge Assisted Living for their incredible care and help they have given us.

The family of James R. Philipps created this Life Tributes page to make it easy to share your memories.

Send flowers to the Philipps family.