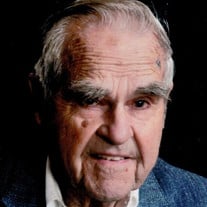 Dodgeville - James C. Murn, age 94, of Dodgeville, passed away on Wednesday, July 17, 2019 after a long and fruitful life. He was the third son of Frank and Jane (Pakiz) Murn of Eagle, WI, who emigrated from Slovenia before World War I. Jim was born and raised on the family farm during the Great Depression and got his first taste of business by keeping detailed records of the farm’s operations. Jim’s oldest brother was killed in action in Italy during World War II. After the war, Jim and his surviving brothers started an Oliver Farm Implement dealership in Palmyra, WI. During that time, he married Helen Wappler, also of Palmyra, with whom he had five children. Jim later left the business to work as a mechanic for an Oliver dealership near Hereford, Texas. He moved the family back to Wisconsin in 1955 after the New Idea Farm Equipment Company recruited him to do field service and development, followed by a number of years serving as a Field Territory Manager. After 17 years, he then opened his own New Idea dealership in Dodgeville called Murn Tire & Tool. He used his business and farm equipment knowledge to serve the farming community. In his later years, he focused his efforts on serving the smaller, family famers; up to the day of his passing. He was married to Charlene Brandt in 1973. She passed away in 1996. In 2001, he married Marge Daentl at St. Joseph’s Church in Dodgeville. Jim was an active participant in civil and social organizations. He spent a number of years as a First Responder for the Iowa County Rescue Squad. He later was elected to the Iowa County Board of Supervisors, where he served for 24 years representing the Township of Dodgeville and where he came to Chair the Iowa County Highway Committee. Jim was a life-long member of the American Slovenian Catholic Union and the Knights of Columbus and was an active member of St. Joseph’s Catholic Church. Jim is survived by his wife Marge Daentl; his daughter Sherry (Ray) Einerson; his three sons James (Sue Winn), David (Mary) and Charles (Jackie); as well as nine grandchildren and 8 great grandchildren; his daughter-in-law Marcia Murn; other relatives and friends. He was preceded in death by his parents, his son Scott and his three brothers and three sisters. A Memorial Mass of Christian Burial will be celebrated at 11:00 a.m. on Tuesday, July 23, 2019 at ST. JOSEPH’S CATHOLIC CHURCH in Dodgeville. Father Tafadzwa Kushamba will officiate. Inurnment will be held in East Side Cemetery in Dodgeville. Friends may call from 4:00 p.m. until 7:00 p.m. on Monday at the GORGEN-McGINLEY & AYERS FUNERAL HOME in Dodgeville and from 10:00 a.m. until time of Mass on Tuesday at the church.

Dodgeville - James C. Murn, age 94, of Dodgeville, passed away on Wednesday, July 17, 2019 after a long and fruitful life. He was the third son of Frank and Jane (Pakiz) Murn of Eagle, WI, who emigrated from Slovenia before World War I. Jim... View Obituary & Service Information

The family of James C. Murn created this Life Tributes page to make it easy to share your memories.

Send flowers to the Murn family.