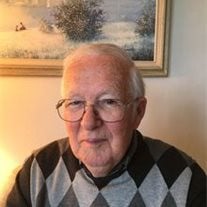 Mineral Point - James E. Johnson (Jim), age 85, passed away surrounded by his loving family on Sunday, May 13, 2018, from complications related to a fall he suffered in January, 2018. Jim was born on July 1, 1932 in Dodgeville, WI to Fred and LaVera Johnson and was one of ten children. Jim graduated from Mineral Point High School in 1951 and attended Mining school before joining the United States Marine Corp. After his military service, Jim attended UW Platteville where he met his future wife, Pat Bonin, the love of his life. Jim and Pat married on June 11, 1955 and had six children. Jim enjoyed a great career at Wisconsin Power & Light Company, where he retired as Senior Vice President after 34 years of employment. Once retired, Jim and Pat enjoyed 24 years spending time with family, travel, volunteering and coffee with friends. Volunteering and giving back was extremely important to Jim and Pat. Jim was a big sports fan and enjoyed watching football, baseball and any sport his grandchildren participated in. Jim is survived by his wife of 62 years, Pat as well as his children; Patty (Jim) Wright, Richard (Mari) Johnson, Susan (Paul) Hundt, Michael (Jane) Johnson, Kathy (Christopher) Krumm and Cari (Jim) Johnson. In addition he is survived by his grandchildren; Brett, Brian, Stephanie, Katie May, Michelle, Dannah, Aaron, Chloe, Ben, Ben, Brady, Michael, Nicole, Jett, Ava, and Chase. Great-grandchildren; Jackson, Adriana, Courtland and Hayden. Jim is survived by his two brothers, Norman (Marilyn) Johnson, Kenneth (Ruth) Johnson and two sisters, Joanne (Sherman) Dammen, Carole (Doug (deceased)) Grunow and many nieces and nephews. He was preceded in death by his parents, Fred and LaVera Johnson, his sisters Charmaine (Fritz) Weitzel, Janice Amenda, his brothers Darold Johnson, Jack (Shirley) Johnson, Gary Johnson and his grandson, Kurt. Jim will be greatly missed, he was a beloved family man who adored his wife and was a proud father and grandfather. He was kind hearted and genuine and would do anything for anyone. He was a great listener and an even better story teller. If love could have saved him he never would have died. A Mass of Christian Burial will be held at 12:00 p.m. on Friday, May 18, 2018 at Ss. MARY & PAUL CATHOLIC CHURCH in Mineral Point. Friends may call from 10:00 a.m. until 11:50 a.m. on Friday at the church. Burial will be held at St. Mary's Cemetery with Military Honors accorded by the Mineral Point American Legion. A reception will be held at the Walker House, 1 Water Street, Mineral Point after the burial from 1:30 until 4:30.

Mineral Point - James E. Johnson (Jim), age 85, passed away surrounded by his loving family on Sunday, May 13, 2018, from complications related to a fall he suffered in January, 2018. Jim was born on July 1, 1932 in Dodgeville, WI to Fred and... View Obituary & Service Information

The family of James "Jim" Johnson created this Life Tributes page to make it easy to share your memories.

Send flowers to the Johnson family.