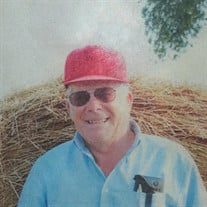 Dodgeville - James (JR) Roscoe Anderson, age 76, of Dodgeville, died on January 11, 2021 at the Greenway Manor nursing home in Spring Green, WI. JR was the son of Roscoe and Catherine (Severson) Anderson. He was born in Madison, WI. on August 23, 1944. Roscoe purchased the family farm in rural Dodgeville in the spring of 1946. This began Jim’s farming life. Jim attended the one room school, West Pleasant Ridge, near the family farm. He graduated from Dodgeville High School in 1962. After high school Jim moved into Dodgeville. He had several job experiences including that of a professional fisherman for Creme Lures Co. His true calling was beef farming, under his brand name Anderson Cattle Company. He rented 2 adjoining farms on the north rim of Governor Dodge State Park. Deer hunting was a sure thing for Jim and his special group of hunters, including those from Fort Atkinson WI. Jim excelled in his farming practices with pasture rotations, water quality, soil conservation, and his special attention to his beef cattle. He received many honors and recognition awards. Every year an Illinois farm family would purchase 8-10 of his steers and many times they were shown at the International livestock show in Denver, CO. Jim’s cattle were his whole life. He enjoyed his membership and his participation of many years with the Iowa County Cattlemen’s Association. Jim was a member of North Dodgeville Lutheran Church until it was destroyed by lightning in 1959. He then joined Grace Lutheran Church in Dodgeville and participated in their steer project. Jim enjoyed the friendships of many, including those who he had worked with. Jim enjoyed our family reunions and worked with others on updating the family genealogy book. Jim is survived by his sisters Linda Norberg of Fort Atkinson, and Marianne Larson of Madison; his brothers, Charles (Sandy Walsh) of Dodgeville, William (Lynn) of Lexington KY, David (Cindi) of El Cerrito CA and Daniel (Barb) of Oregon, Wi. Many nieces, nephews, grand nieces and nephews and 6 great grand nieces and nephews. Jim was preceded in death by his parents, his sister Roxie, two sisters-in-law and four brothers-in-law. A Celebration of Life “Last Roundup” for JR will be held at PLEASANT RIDGE STORE, 4948 County Road Z, Dodgeville, WI from 1:00 p.m. until 5:00 p.m. on Saturday, August 21, 2021. Food and refreshments will be provided by his family. The family requests that Memorials be made to the radio broadcast fund or the kitchen fund at Grace Lutheran Church, Dodgeville, the Rock Church Cemetery Assoc. of Dodgeville (% of Charles Anderson) and or the Iowa County Cattlemen Assoc. The family would like to thank the staff at Crest Ridge Assisted Living in Dodgeville and The Meadows in Spring Green and Greenway Manor Nursing Home in Spring Green.

Dodgeville - James (JR) Roscoe Anderson, age 76, of Dodgeville, died on January 11, 2021 at the Greenway Manor nursing home in Spring Green, WI. JR was the son of Roscoe and Catherine (Severson) Anderson. He was born in Madison, WI. on August... View Obituary & Service Information

The family of James "JR" Anderson created this Life Tributes page to make it easy to share your memories.

Send flowers to the Anderson family.