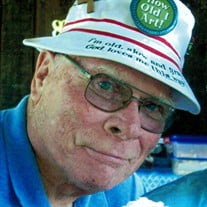 Dodgeville – Jack Bernard Richards, age 85, went to be with the Lord in his inherited heavenly home on Friday, August 14, 2020 at 5:47 a.m. Jack was born on January 8, 1935 to Thomas Howard Richards and Arlene (Udstad) Richards in Aurora, IL. Jack graduated from East Aurora High School in 1953. He served 2 years in the Naval Reserve while in High School; and upon graduation, he served 2 years active duty, and on the USS Pickett, stationed in San Francisco, CA, for his final year of active duty. Jack was incredibly proud of his service for our country. Jack served as Chaplain aboard the Pickett, as he had aspirations of becoming a minister. Upon discharge from the Navy, Jack joined his brother, Owen, in owning and operating a hobby shop. As children, Jack and his brother built and flew model airplanes and were involved in a model airplane club. Jack later worked as an apprentice millwright, completing a 4 year apprenticeship in 2 years. Shortly after completion of the apprenticeship, he purchased his own cabinet shop, naming it Superior Cabinets. In 1957, he married his sweetheart and beloved wife of 63 years, Sandra Jean Wehrs. In 1966 they moved to Wisconsin where he added home construction to his cabinetry skills. The combined businesses became Superior Enterprises. Not one to sit still for any stretch of time, as many knew Jack to be, another endeavor; carpet cleaning was added in 1968. So, Stay New Carpet Cleaners was created. In 1984 Jack began teaching construction at Southwest Vocational Technical Institute, where he spent several years teaching his many millwork/construction skills. He also sold life insurance for years, winning several awards. Jack, a heart of gold, and always wanting to help others, became involved in Self-Help Housing following the devastation of Barneveld, WI by the tornado of 1984. Jack served as project manager for the countless Self-Help Housing projects in Iowa County. He dedicated a great deal of his time to Habitat for Humanity over the years from his charitable heart; and upon his "retirement", which never actually took place, Jack began driving school bus for the Dodgeville School System in 2000. Named Bus Driver of the Year many times over, Jack loved his time behind the wheel. He stopped driving bus in 2006. For enjoyment, Jack bowled for nearly his entire married life. Wednesday Bowling League in Dodgeville was a weekly activity Jack seldom missed, and where he made so many dear friends. Jack was also very involved in his Church, Faith Fellowship Church in Dodgeville, dedicating many years of service to church cleaning, remodeling, attendance, ushering, Awana Group, men’s bible study, and worship. His heart was the Lord's, and he always wanted to tell people about saving faith in Jesus. He attended Promise Keepers Men's Bible Conferences with his sons, and his church. He loved his family beyond measure and spent his last years sharing stories of his past, lighting up a room with his laughter during a game of Farkle or cards, and never lost his sense of humor. Jack is survived by his wife, Sandra; his children Kent David Richards (Cristina), Debra Jean Richards, Michael Paul Richards (Dani)and Melissa Christine LeVine (Charles H. Jr.); his uncle, Donald Udstad (Jean); 7 grandchildren; 7 great grandchildren; 1 grandson-in-law; 5 step-grandchildren; 1 niece; 2 nephews; 1 daughter-in-love, Cheryl Richards. Jack is preceded in death by his parents; brother Owen; his grandson, James Cody Richards (Debra) and his nephew, Judson Richards. A Memorial of God's Faithfulness at FAITH FELLOWSHIP CHURCH in Dodgeville will be held at 3:00 p.m. on Tuesday, August 18, 2020. The Service will be followed by Military Graveside Rites accorded by the Dodgeville Area Veterans and the Patriot Guard Riders Honor Guard (organized by dear friend, John Curran). Pastor Alex Ruggieri will officiate. Friends may call from 1:00 p.m. until time of services on Tuesday at FAITH FELLOWSHIP CHURCH in Dodgeville. Due to Wisconsin’s public health mandate, masks are to be worn during the duration of your visit inside of the church and that you practice proper social distancing guidelines. In lieu of flowers, memorials may be made to The American Bible Society or the Parkinson's Disease Assoc.

The family of Jack B. Richards created this Life Tributes page to make it easy to share your memories.

Dodgeville – Jack Bernard Richards, age 85, went to be with the...

Send flowers to the Richards family.