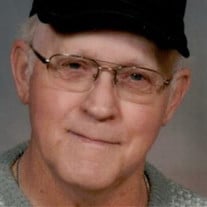 Linden – Jack A. (John) Gilman, age 78, of Linden, passed away on Friday, July 6, 2018 at his home, following a long painful battle with cancer. Jack was born on March 13, 1940 to Gordon and Martha (Paynter) Gilman. He married his sweety Diane Severtson on July 6, 1963. They had four children Rick, Terri, Rob and Traci. Jack was truly a jack of all trades, farming, working the Linden mine, road construction and working for Linden Township for 28 years before retiring in 2003. Jack’s wood working hobby led to many amazing park benches, tailgate tables and other pieces that will long be cherished. Jack was a lifelong camper and made many great memories with his kids and grandkids. Jack is survived by his wife of 55 years Diane; his daughters Terri (Greg) Jewett of Montfort and Traci (Jim Reid) Gilman of Cobb; his son Rob (Michelle) Gilman of Lone Rock; 9 grandchildren Ross and Reed Caygill, Dawson and Delaney Reid and Ricky, Josh, Johnny, Jacob and Dakota Gilman; other relatives and friends. Jack was preceded in death by his son Rick, his parents, and all of his siblings Carlton, Bill, Ann and Dick. Funeral services will be held at 11:00 a.m. on Tuesday, July 10, 2018 at the GORGEN-McGINLEY & AYERS FUNERAL HOME in Dodgeville. Burial will be held in Linden Cemetery. Friends may call from 4:00 p.m. until 7:00 p.m. on Monday and from 10:00 a.m. until time of service on Tuesday at the funeral home. It was a little ditty about Jack & Diane, now come to an end, until they meet again.

The family of Jack A. Gilman created this Life Tributes page to make it easy to share your memories.

Send flowers to the Gilman family.