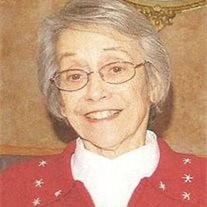 Mineral Point - Isabell Erna (Powell) Hanson age 86, passed into eternal life on May 25, 2013 surrounded by her loving family after a brief illness at Upland Hills Hospital in Dodgeville Wisconsin. She was born at St Joseph Hospital in Dodgeville on April 28, 1927 the oldest daughter of William and Erna (Streich) Powell. She lived on a farm outside of Ridgeway for many years before moving to Mineral Point and graduating high school in 1945. She then attended Madison Business College. She married Raymond Herbert Hanson on August 31, 1948 at the First United Methodist Church in Mineral Point. Isabell retired from WDMP radio station working there as the bookkeeper. During her career she also worked at Wisconsin Power and Light, Mineral Point High School in the office, The Democrat Tribune, Farmers Savings Bank and at Lands' End on the phones.. She loved doing crafts with her homemakers group. Her house was always filled for the holidays with many of her hand made decorations. Church was always a big part of her life. She was a member of the Women of Faith group at Faith Lutheran, baking cookies and pies for various functions and always lending a helping hand to those who needed and she served on the church counsel for many years as secretary or treasurer. She and Ray enjoyed many years of square dancing in their younger years. She was also a member of the Rebekah's society. She is survived by her loving husband of 64 years, Raymond H. Hanson, children David (Suzy), Monona, Cheryl Hanson-Liu, Evansville, Kevin (Sally) and Eric (Renee) both of Dodgeville. 9 Grandchildren: Adrienne and Aeriond Liu, Kirsten and Christopher Hanson, Lexie and Rebecca Teschan, Gregory and Jacob Hanson and Dana Hanson. Brother Donald (Pat) Powell, sisters Genevieve Peplinski, Darlene (Merle) Uren, Frances Powell, Margaret (Bill) Heins, Marion Hunter, brothers-in-law, Al (Ruth) Hanson, Marvin (Phyllis) Hanson, Clarence Schill, sisters-in-law Annabelle Cutler, Phoebe Hanson and many nieces, nephews and other relatives. She was preceded in death by her parents; 3 brothers William Jr., Harold and Robert (Rachael) Powell, sister Bernice (Larry) Martin, 2 brothers-in-law Curtis and Reuben Hanson, 4 sisters-in-law Gladys Thorison, Edna Whitford, Grace Roberts and Norma Schill. Funeral Services will be held on Wednesday, May 29, 2013 at 11:00 a.m. at the FAITH LUTHERAN CHURCH in Mineral Point. Burial will be in Graceland Cemetery. A visitation will be held on Tuesday, May 28, 2013 from 5:00 – 8:00 p.m. and on Wednesday from 10:00 a.m. until time of service all at the FAITH LUTHERAN CHURCH.

The family of Isabell E. Hanson created this Life Tributes page to make it easy to share your memories.

Send flowers to the Hanson family.