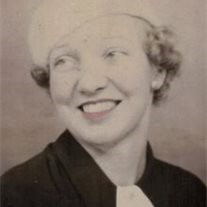 "Inez, Inez!" her friend called from the bottom of the stairs. "I got the job—with the telephone company." Breathlessly, she called louder this time, "they have a job for you too. Come on, let's go talk with the supervisor." This was long before cell phones, when there were such things as switchboards, and clever young girls with nimble fingers who made the connections and even talked to customers when needed. Inez was 17, still in school, her parents separated, and she had given up all thoughts of being a nurse. She continued working for AT&T for 35 years-- on the switchboard, as a supervisor, and as a teacher. She favored the 3-10:00 shifts so she could go out with the girls after work. A 'troublemaker' she called herself, but she didn't really cause trouble, rather she made fun, repeating silly and occasionally suggestive jokes, remaining a real tease all her life. On her 100th birthday, when repeatedly congratulated, she lamented, "Yes, 100 years old, but now I'll never get a man!" She did, of course, get a man. She eloped in 1938 with a delightful, cricket playing Cornishman named Charley Jenkin, and they had a son named John. She is survived by her first daughter-in-law (Anne), second daughter-law Linda, two grandsons, Brett (Beth) and Bradd , and great grandchildren, Brittany and Bryce from Brett's first marriage to Rhonda, and Rebecca and Rachael from Bradd's marriage to Dawn, and great grandson, Daniel. Inez was born January 14, 1916, in Tri-Mountain Michigan, to Cornish immigrants named Alfred and Clara Bale. When the copper mine shut down, Alf lost his job as foreman, and Inez' parents moved to Lake Forest, Illinois, where she lived for the rest of her life, until coming to Mineral Point where her son lived, and finally, Dodgeville. But, life is more than longevity, dates, and a list of relatives; it's an opportunity to practice principles that endure and make life worth living, When Inez first started work, her supervisor suggested all the new girls save money. Inez bought AT&T stock the first week she worked for the company. She never sold the stock, so it grew, and she and Charley, who worked for the Lake Forest Schools and on private estates, enjoyed those precious commodities—security and travel. Inez was notably generous to all those who shared their love, loyalty and largess with her. Throughout this century and last, she enjoyed having dinner or cards with family or friends, traveling out west with Byron and Lorraine Jones, Mary Curtis and Clarence, and to England and Australia, Belgium, and Nova Scotia, to see relatives and friends. As she approached 90, she and Victor Pulford enjoyed a special and enduring friendship. She lived independently and died gently, under the care of her friends at Stonefield, Crestridge, Upland Hills Hospice, and her family. Thanks to Dr. Grieshaber, Dr. Arbeje, and Dr. Gibbons, who enabled her to have a healthy and comfortable life. A Memorial Service will be held at 11:00 a.m. on Saturday, August 26, 2017 at the GORGEN-McGINLEY & AYERS FUNERAL HOME in Dodgeville. Lunch will be held at the home of Anne Bachner, 4091 County Road Z, Dodgeville, WI 53533. In lieu of flowers, please send memorials to Home Care & Upland Hills Hospice or Iowa County Humane Society.

"Inez, Inez!" her friend called from the bottom of the stairs. "I got the job&#8212;with the telephone company." Breathlessly, she called louder this time, "they have a job for you too. Come on, let's go talk with the supervisor." This was long... View Obituary & Service Information

The family of Inez E. Jenkin created this Life Tributes page to make it easy to share your memories.

&quot;Inez, Inez!&quot; her friend called from the bottom of the stairs....

Send flowers to the Jenkin family.