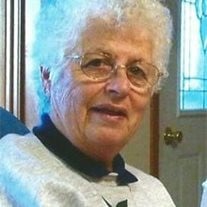 Mineral Point – Ida L. Theobald, age 82, of Mineral Point, passed away after a short battle with cancer on Wednesday, September 23, 2015 at Upland Hills Nursing & Rehab Center. She was born on March 15, 1933 in Barneveld, a daughter of John and Freida Wegmueller. She graduated from Barneveld High School in 1951 as Salutatorian. On October 26, 1952, Ida married her high school sweetheart and the love of her life, Allen Theobald. They farmed several places before settling in Mineral Point in 1962. Everyone enjoyed an "Ida Cake" and she made many birthday and wedding cakes. She was an avid knitter and gave many dish clothes and afghans away. Ida and Allen worked side by side on the farm and she was very proud of her Swiss heritage; she and Allie made several trips to Switzerland. Ida was preceded in death by her parents, John and Freida, her siblings, Frieda (Fred) Maurer, Walter John (Ruth) Wegmueller, Rudy Wegmueller, Ernest (Ruth) Wegmueller, Ruth (Alfred) Wittwer, her brother-in-law, Dick Beyler, her nephews, John Wegmueller and Ralph Maurer and her niece, Ann Wittwer. Ida is survived by her husband, Allen; her children, Steve (JoAnn) Theobald and Connie (Jim) March both of Dodgeville; her grandchildren, Lisa (Ryan) Yeakley (Evan, Emma, Tyler, Jacob) of Oregon, Mark (Megan) Theobald (Payton) of Wausau, Jeremy (Korena) Theobald (Kailyn, Oliver, Finn, Hattie) of Viroqua, Justin (Faith Jordan) Theobald (Grace) of Dodgeville, Kim (Chad Mumm) March (Beau) of Mt. Horeb, Travis (Kelly Frawley) March of Dodgeville and Missy (Josh) Garvey of Dodgeville; her sister, Ruby Beyler of Monona; her brothers-in-law, Dale (Arlene) Theobald and Fred (Vicki) Theobald, both of Barneveld. Funeral Services will be held at 11:00 a.m. on Saturday, September 26, 2015 at the GORGEN-McGINLEY & AYERS FUNERAL HOME in Dodgeville. Rev. Kathy J. Jacobson will officiate. Burial will be held in Middlebury Cemetery. Friends may call from 9:00 a.m. until time of services on Saturday at the funeral home.

Mineral Point &#8211; Ida L. Theobald, age 82, of Mineral Point, passed away after a short battle with cancer on Wednesday, September 23, 2015 at Upland Hills Nursing & Rehab Center. She was born on March 15, 1933 in Barneveld, a daughter of... View Obituary & Service Information

The family of Ida L. Theobald created this Life Tributes page to make it easy to share your memories.

Send flowers to the Theobald family.