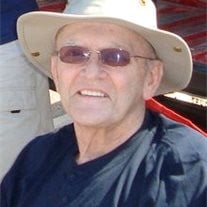 Dodgeville / San Diego – Henry Michael Nugent, age 75, passed away on Wednesday, September 26, 2012 at St. Mary's Hospital in Madison. He was born on December 29, 1936, in the Bronx, NY, one of six children raised by James & Mary (McCaffrey) Nugent both of County Lietrim, Ireland and Bronx, NY. Siblings include: James (deceased), May (Bob) Weinbaum, Royal Oak MI, Anne Wettler, Huntington Beach, CA, Ed (Marianne) Nugent, Lyndhurst NJ, Hugh (Barbara) Nugent Houston, TX. He ran track and graduated from Cardinal Hayes High School, NYC in 1954, and attended US Merchant Marine Academy, class of 1958. In 1963, he married Maureen "Mickey" Otto in Glasgow, MT. Henry sailed merchant ships for three years. He later joined the United States Air Force in 1960, accumulating 2500 hours in B-52s and 600 hours in the B-58 -Hustler-supersonic bomber. He was a Vietnam War veteran and left active duty in 1971 as a Major and retired from the Montana Air National Guard in 1996 with 41 years continuous service. He began work for the United States Postal Service in 1982 and retired as Employee Assistance Program Manager of Montana in 1988. After retirement he traveled the U.S. and world finally settling in San Diego, CA. Henry also spent years in Joliet, Montana raising sheep, malting barley and kids. He is survived by his wife, Mickey, who without her none of this would have been possible; his daughter, Jennifer, of Dodgeville, WI; his two sons, Steven, of Billings, MT and Andrew, of San Diego CA; his six grandchildren, Henry and Jack Schickel, of Dodgeville, Tinsley and Bella Nugent, of San Diego CA and Race and Dash Nugent, of Billings, MT; also, and with love to Duane, Lynda, & Nic.; Please love my children as I have loved Mickey and I will rest peacefully. A Celebration of Henry's Life will be held from 4:00 p.m. until 8:00 p.m. on Monday, October 1, 2012 at the GORGEN-McGINLEY & AYERS FUNERAL HOME in Dodgeville. In lieu of flowers, memorials may be made to Dodge-Point Track and Cross County Teams at Dodgeville High School, 912 W. Chapel St., Dodgeville, WI 53533 or the charity of your choice. Thanks to all for such a good life.

The family of Henry Michael Nugent created this Life Tributes page to make it easy to share your memories.

Send flowers to the Nugent family.