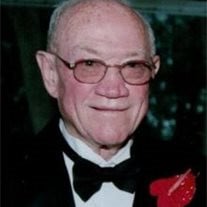 Dodgeville - Henry C. Brennan, age 94, of Dodgeville, died on Sunday, April 24, 2016 at Upland Hills Nursing and Rehab Center, surrounded by his loving family. Henry was born on June 22, 1921, in Dodgeville, the son of Matt and Myrtle (Crook) Brennan. He went to Furnace Ridge Grade School and Dodgeville High School. He married Mary Wagner on May 13, 1961; she preceded him in death on September 2, 1997. Together they were blessed with four children, Jean, Michelle, June and Scott and two grandchildren, Delaney and Chapin, who were his pride and joy. Henry farmed in early life, and was drafted in to the Navy on Dec. 19, 1944 during WWII. He left for Japan right after the war was over, and spent the winters of 1944 and '45 in Japan on the Japanese battleship Nagata, preparing the ship to go to the Bikini Atolls to be bombed. He was discharged from the Navy in 1946. Upon arrival home, he farmed for a while, and then in Feb. of 1952 went to California and worked in an aircraft factory and then to a shipyard making mine sweepers. He then went overseas to work with the Atomic Energy Commission. He made two trips to Eniwetok, which is part of the Marshall Islands. The first was for six months, and the second was for fourteen months. He came back to Wisconsin briefly, and then went to work in Canada briefly. He returned home and took over the Red Room tavern for eleven and a half years. After that he worked as a Union carpenter for twenty five years and retired. He then worked with Larry Ruff in Dodgeville, remodeling and building houses, and worked until he was 82 years old. Henry is survived by his children Jean (Mike) Orr, Michelle (Mike) Roesch, June (Bob Ernzen) Thompson, and Scott Brennan; his grandchildren, Delaney and Chapin Orr; his three sisters, Margaret Karls, Mary (Joe) Esch and Carol Ann Deans; other relatives and friends. He was preceded in death by his wife, Mary, his parents, Matt and Myrtle Brennan, his in-laws, Frank and Bridget Wagner, four brothers, John, Bob, Raymond, and Francis, his sisters Betty Wunnicke and Alice Terrill, and numerous in-laws and other relatives. A Mass of Christian Burial will be celebrated at 11:00 a.m. on Thursday, April 28, 2016 at ST. JOSEPH'S CATHOLIC CHURCH in Dodgeville. Burial will be held in St. Joseph's Cemetery with Military Graveside Rites accorded by the Dodgeville Veterans. Friends may call from 4:00 p.m. until 7:00 p.m. on Wednesday at the GORGEN-McGINLEY & AYERS FUNERAL HOME in Dodgeville, where a parish rosary service will be held at 7:00 p.m. Friends may also call from 10:00 a.m. until time of Mass on Thursday at the church. The family suggests that memorials be made to Upland Hills Nursing & Rehab Center or St. Joseph's Catholic Church.

The family of Henry C. Brennan created this Life Tributes page to make it easy to share your memories.

Send flowers to the Brennan family.