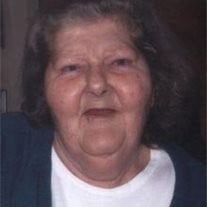 Mineral Point - Hazel L. Jacobson, age 79, of Mineral Point, died on Wednesday, November 14, 2012 at Bloomfield Healthcare and Rehab Center. She was born on August 30, 1933 in Linden, Wisconsin, a daughter of William and Emma (Jungbluth) Bray. She married Jesse Jacobson on May 11, 1956. He preceded her in death on September 28, 1979. Hazel worked at Burgess Battery, J & R Bar, Schmitz's Bar and various house cleaning jobs around Mineral Point. She enjoyed time with her kids and pets. While living in Mineral Point, she enjoyed her walks up to Main Street and visiting with the local merchants. Hazel is survived by her two sons, Jesse, Jr., of Montfort and Alfred (Vicki) Jacobson, of Dodgeville and nieces, nephews and cousins. She was preceded in death by her husband, her parents, two brothers, Frederick and Lavon Bray and her sister, Mary Polkinghorn. Funeral services will be held at 11:30 a.m. on Saturday, November 17, 2012 at the GORGEN FUNERAL HOME in Mineral Point. Rev. Daniel Yeazel will officiate. Burial will be held in Graceland Cemetery. Friends may call from 9:30 a.m. until time of services on Saturday at the GORGEN FUNERAL HOME in Mineral Point.

The family of Hazel L. Jacobson created this Life Tributes page to make it easy to share your memories.

Send flowers to the Jacobson family.