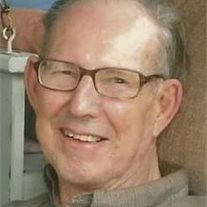 Mineral Point - Harry Burton Weicht, age 81, of Mineral Point, died peacefully at his home on Wednesday, October 28, 2015. He was born to Merle and Ruth (Carney) Weicht on January 23, 1934 in Marcus, Iowa. He graduated from Marcus High School in 1952. After high school, he enlisted in the Air Force and was stationed at Truax Air Force Base in Madison. He married Carol K. Chapman on October 19, 1956. He worked for the Illinois Central in Scales Mound, Illinois for 17 years. In 1970, he moved to Dodgeville to work for General Telephone until his retirement in 1995. In 1978, he and his wife moved to Mineral Point. He remodeled every room in the home they purchased. Harry and Carol enjoyed visiting family in Pennsylvania, going on vacations to California, Washington, Louisiana, Virginia and reunions with both side of the family. He liked to tell stories about growing up as a child. He shared with his children and his grandchildren. Harry is survived by his daughter, Cynthia Heaton of Middleton; two sons, Jeffrey (Debbie) Weicht of Rockford, Illinois and Dwight (Julie) Weicht of Heathsville, Virginia. He was blessed with six grandchildren, two great-grandsons and a great-granddaughter: April and her son Nathaniel, Virginia (Nate) Forrest, son Xandar and daughter Abigayle, Adele, Franklin, Jessica and Cody. He is preceded in death by his wife, parents, many brothers and sisters. Funeral Services will be held on Tuesday, November 3, 2015 at 11:00 a.m. at the GORGEN FUNERAL HOME in Mineral Point. Military Graveside rites will be accorded by the Mineral Point VFW and American Legion at Graceland Cemetery. A visitation will be held on Tuesday from 9:00 - 10:50 a.m. at the Gorgen Funeral Home.

The family of Harry B. Weicht created this Life Tributes page to make it easy to share your memories.

Send flowers to the Weicht family.