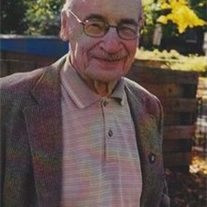 Mineral Point - Harry George Hutchison, age 104, of Mineral Point, Wisconsin, died Thanksgiving Day, November 26, 2015, at Atrium Post Acute Care Center in Mineral Point. He was born July 25, 1911, Harry was seventh of the nine children of Charles and Bertha Hutchison. Although his parents named him "Henry," from the day he was born his siblings insisted that "Henry" was too formal, and therefore inappropriate, for a baby. They called him Harry, and he used that name throughout his life. He grew up in Mineral Point and attended Mineral Point public schools. After graduating from Mineral Point High School in 1929, he went to Madison to attend the University of Wisconsin, graduating in 1933 with a Bachelor of Arts degree. He received a law degree from the University of Wisconsin Law School in 1935. After being admitted to the bar in January 1936, Harry entered the private practice of law, first in Madison and then in Whitewater. While in Whitewater, he met and courted Eleanore Lyle. They were married January 6, 1941 and had two sons, Thomas, born August 20, 1942, and James, born February 22, 1945. During World War II, Harry served in what was then called the Army Air Force. He was assigned to the Sixth Photographic Squadron (Compilation), which was stationed at Camp Carson, Colorado. The squadron was an elite, specialized unit that received film from aerial reconnaissance units deployed in combat areas around the world and then used the film to prepare detailed maps and charts of foreign areas. The army considered moving the squadron to the China-Burma-India Theater of Operations but abandoned that plan because the army was reluctant to move large quantities of sensitive and classified equipment to primitive facilities. In the fall of 1944 the army sought volunteers for an intelligence mission in Brazil that was intended to track Nazi activities there. Harry volunteered, underwent training, and was sent to a staging area. He was ready to leave on the mission when it was canceled because the government determined that the progress of the war against Germany made the mission unnecessary. He then returned to the Sixth Photographic Squadron. Harry was discharged from service on November 10, 1945. Not long after being discharged he joined the Veterans Administration, which today is known as the Department of Veterans Affairs. His work involved evaluating claims for disability benefits filed by veterans. For most of his career he was stationed in Milwaukee, but he was also stationed in the Twin Cities, Reno, Nevada, and Winston-Salem, North Carolina for short periods of time. He was stationed in Winston-Salem when he retired at the end of 1975. Harry and Eleanore considered a number of places to live in retirement. They decided to return to Harry's place of birth, and they moved to Mineral Point. Harry was elected to the City Council in 1977 and in 1978 was elected Mayor. While he was serving as Mayor, Eleanore died. He did not seek reelection. Harry was a member of the First United Methodist Church in Mineral Point and over the years was active in a number of civic and fraternal organizations, including the Kiwanis Club, of which he was president for a term, the American Legion, and the Masonic Lodge. He was a life-long stamp collector, who branched out into collecting other thing, like coins. In the mid 1970's, he and several other Mineral Point area residents formed a club for the collection of commemorative bottles. He had a great interest in the history of Wisconsin and of Mineral Point, and would entertain family, friends, acquaintances, and anyone who would listen with stories about the oldest English-speaking city in Wisconsin and the third-oldest city in state (behind Prairie du Chien and Green Bay). One of his greatest thrills occurred in 2011, just three weeks short of his one-hundredth birthday, when he served as Grand Marshall of Mineral Point's Fourth of July parade. On his one-hundredth birthday, he received two memorable gifts – a congratulatory letter from the President of the United States, and a United States flag that had flown over the U.S. Capitol, sent to him by Representative Ron Kind. His sons, four grandchildren, and one great-grandchild survive him. His second wife, Gladys, died on December 16, 2015. A Memorial Service and Masonic Service for Harry will be held on Saturday, January 30, 2016 at 11:00 a.m. at the FIRST UNITED METHODIST CHURCH in Mineral Point. Military Graveside rites will be accorded by the Mineral Point VFW and American Legion at Graceland Cemetery. The family suggests that in lieu of flowers a donation be made to the First United Methodist Church of Mineral Point , to Hodan Community Services, 941 W. Fountain St. Mineral Point, WI 53565 or to Seniors United for Nutrition, 303 W. Chapel St. Dodgeville, WI 53533.

The family of Harry G. Hutchison created this Life Tributes page to make it easy to share your memories.