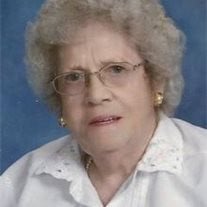 Mineral Point / Dodgeville – Harrietta V. Starr, age 82, of Mineral Point, formerly of Dodgeville, passed away on Saturday, November 30, 2013 at the Mineral Point Care Center. She was born on April 14, 1931 in Clyde Township, Wisconsin, a daughter of the late Harry L. and Viola (Richardson) Rabuck. On October 12, 1946, she married Emerson Starr. He preceded her in death in 2001. They had two children, Linda, born in 1947 and Tom, born in 1950. They farmed with Emerson's parents for 2 years before moving to Little Bear Valley, where they farmed for a few more years. In 1956, Harrietta started working outside the home at the Dutch Kitchen in Spring Green. In 1960, they moved to the Dodgeville area where she held many jobs. She was a member of Grace Lutheran Church and its GLCW. Harrietta is survived by her children, Linda (best friend, Skip Lichter) Rowe, of North Freedom and Tom (Frances) Starr, of Mineral Point; her grandchildren, Theresa (Scott) Bauer, Jody (Mark) Johnson, Holly (Bill) Armour and Deanna (Chad) Hahn; 9 great grandchildren; her sister, Phyllis Frye, of Reedsburg; special cousin, Grace Alt; other relatives and friends. She was preceded in death by her husband, Emerson; her grandson, Scott Rowe, her sisters, Marie Christianson and Eunice Adams. Funeral services will be held at 11:00 a.m. on Wednesday, December 4, 2013 at GRACE LUTHERAN CHURCH in Dodgeville. Reverend Steven Kottke will officiate. Burial will be held in East Side Cemetery. Friends may call from 4:00 p.m. until 8:00 p.m. on Tuesday at the GORGEN-McGINLEY & AYERS FUNERAL HOME in Dodgeville and from 10:00 a.m. until time of services on Wednesday at the church.

The family of Harrietta V. Starr created this Life Tributes page to make it easy to share your memories.

Send flowers to the Starr family.