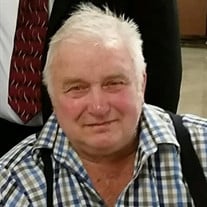 Mineral Point - Harold “Pete” Schaaf, age 85 of Mineral Point, passed away March 28, 2020. He was born to Henry and Loretta (Dochnahl) Schaaf on July 15, 1934. Save for his final 15 months, he spent his life on the family farm. Pete began his career as a farmer using horses, before electricity reached the area. He always had a favorite animal on the farm; whether it be a pigeon, pig, sheep, dog, raccoon, or cow. Despite farm obligations, he loved to travel. He was able to reach Mexico, Canada, and 48 states; notably missing Delaware. He carefully studied every National Geographic issue for almost 47 years, and provided travel advice for people going to almost any destination imaginable, whether the travel advice was sought or not. Pete helped several of his nephews through challenging circumstances in their teenage years, and brought smiles to his nieces with a goodnatured wink. Numerous nieces and nephews have noted that he was a fun uncle. Despite being prone to sailor-like language, Pete married a former nun, Grace (Streng) on September 6, 1980. Their son, Jonathan, was born when Pete was 49 years old. He was a loving and devoted father and husband. He spent his final years helping his wife Grace in her ongoing battle with dementia. Pete’s mother was widowed when he was a toddler, giving him great empathy for those in difficult circumstances. He cared deeply about those in need, whether at home or far away, and put his money where his mouth was. In honor of his generosity, those who are able are encouraged to send a donation to the Iowa County Food Pantry or another suitable charity. Pete is survived by his wife Grace Schaaf; a son Jonathan (Sarah) Schaaf; a sister Charlotte Douglas; a sister-in-law Doris Schaaf; and numerous nieces and nephews. He was preceded in death by his parents; 3 brothers John Schaaf, Paul Schaaf, Vincent Schaaf; and 4 sisters, Ann Cutler, Mary Henkel, Dorothy Saar, and Henrietta McCaulley. Due to the ongoing pandemic, all funeral services will be private. A gathering to celebrate Pete’s life will be announced in the future when circumstances allow. Cards may be sent to the family in care of Gorgen Funeral home.

The family of Harold Peter Schaaf created this Life Tributes page to make it easy to share your memories.