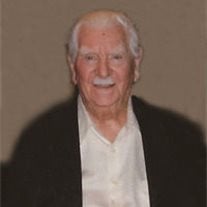 Palm Harbor, FL - Harold J. Bruscato, age 91, of Palm Harbor, Florida passed away peacefully February 5, 2012 after complications from a stroke. He was born to Samuel Bruscato and Catherine (Pryael) on April 16, 1920 in Chicago, Illinois. He married Clara Wadzinski in Baltimore, Maryland on June 17, 1939 and she preceded him in death on March 5, 2011. He was a Naval Veteran of World War II and served in the Pacific Theater. They raised their family in Chicago, Illinois until moving to Wonder Lake, Illinois in 1953. Harold and Clara retired to Palm Harbor, Florida in 1985 and bought a home with their daughter and son-in-law, Jack and Eileen Buxton. Harold was an avid gardener and sold plants twice a year at real bargain prices. He is survived by his son, Samuel Bruscato (OK Yong) of Pell Lake; his daughter and caregiver, Eileen (Jack) Buxton of Palm Harbor, Florida and Kathleen (Dick) Marr of Mineral Point and Mesa, Arizona. He is also survived by eight grandchildren, thirteen great-grandchildren and four great-great grandchildren. Harold's parents, his younger brother, Anthony Russell, several aunts and uncles all preceded him in death. A Mass of Christian Burial will be held on Saturday, February 18 at 11:00 a.m. at Ss. MARY & PAUL CATHOLIC CHURCH. Father James Hinnen will officiate. Burial will be in St. Mary's Cemetery with military rites accorded by the Mineral Point VFW and American Legion. A visitation will be held on Friday, February 17th from 4:00-8:00 p.m. at the GORGEN FUNERAL HOME in Mineral Point and also on Saturday from 10:00 a.m. until the time of service at the church.

Palm Harbor, FL - Harold J. Bruscato, age 91, of Palm Harbor, Florida passed away peacefully February 5, 2012 after complications from a stroke. He was born to Samuel Bruscato and Catherine (Pryael) on April 16, 1920 in Chicago, Illinois. He... View Obituary & Service Information

The family of Harold J. Bruscato created this Life Tributes page to make it easy to share your memories.