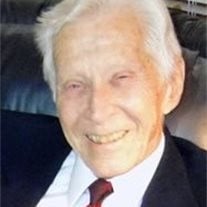 Arizona - Harold A. (Hal) Hokenson, passed away on Tuesday, May 7, 2013 in Arizona. Harold (Hal) was born on October 27, 1931 on the family farm of Algot and Hilda Hokenson, three miles south of Independence, Iowa. He was the third of four children. Harold attended a rural one-room school for the first eight years of his education. He then proceeded to high school in the Independence school system where he became interested in band. Harold received a BA degree in music education from Coe College in Cedar Rapids, Iowa in June of 1953. That same day he received his commission as a 2nd Lt. in the USAF. Upon graduation he went on a three-year tour of active duty with the air Force and spent most of that time as an intercept controller based at Itazuke Air Force Base, Japan. Harold's first teaching job was in Hanover, Illinois where he met his wife, Phyllis Boldt. Phyllis and Hal were married on December 22, 1956. From Hanover, he landed a wonderful job in Mineral Point, Wisconsin and had a successful 17-year career as a band director in that community. From Mineral Point, he and his family moved to Sterling, Illinois where he spent 25 years as the band director of the middle school band. Harold retired from public school teaching in 2000 and then took a postretirement job with the Newman Central Catholic High School where he re-started the band program that had been discontinued for several years. Harold finally retired entirely to the warm climate of Arizona in 2006 and lived there until the time of his death. Hal is survived by is son, Eric (LeeAnn) and their children, Tristian and Taylor of Brookings, South Dakota; his daughter, Janel Huyett (Greg) and their daughters, Rachel and Bridget of Chandler, Arizona. He is also survived by one sister Esther Wetlaufer (Roger) of Tucson, Arizona. He was preceded in death by his parents, his wife Phyllis, one sister and one brother. Funeral services will be held on Tuesday, May 14, 2013 at 1:00 p.m. at the GORGEN FUNERAL HOME in Mineral Point, WI. Burial will be in Graceland Cemetery. Friends may call on Tuesday from 12:00 noon until time of service at the GORGEN FUNERAL HOME. A Memorial Service will be held on Monday, May 13, 2013 at St. PAUL'S LUTHERAN CHURCH, 1701 16th Avenue, Sterling, Illinois beginning at 6:30 pm In lieu of flowers, memorials may be made to the Hope Lutheran Church in Mineral Point.

Arizona - Harold A. (Hal) Hokenson, passed away on Tuesday, May 7, 2013 in Arizona. Harold (Hal) was born on October 27, 1931 on the family farm of Algot and Hilda Hokenson, three miles south of Independence, Iowa. He was the third of four... View Obituary & Service Information

The family of Harold A. "Hal" Hokenson created this Life Tributes page to make it easy to share your memories.

Arizona - Harold A. (Hal) Hokenson, passed away on Tuesday, May...