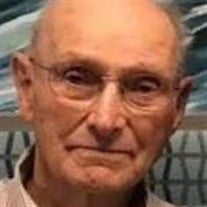 Dodgeville - H. Dale Mortimer, age 94, of Dodgeville, passed away on Sunday, August 11, 2019, heaven got the best of the best when Dale was called home. Dale was born in Valton, WI on Jan. 11, 1925 to Herbert and Florence (Beier) Mortimer. He is survived by his wife Nancy of 34 years; his children Vicki (Jeff) Rolland of Neptune Beach, FL, Kim (Rod Campbell) Hogan of Madison, WI and David (Marsha) Mortimer of Dodgeville; his step children Lynn (Jim) Cowlin of Crystal Lake, IL, Laurie (Mike Martin) Forseth of Dodgeville, Larry (Melanie) Forseth of Dodgeville, Lisa (John) Johnsrud of Dodgeville and Lee (Marsy) Forseth of Aurora, IL; he is further survived by Nancy's children Bob (Julie) Ruppert of Knoxville, TN, Tammy (Mike) Mulcahy of Hubertus, WI, Tina (Don) Smith of Dodgeville and Theresa (Jim) Davis of Portland, OR. Dale's loving arms reached 28 grandchildren and 29 great grandchildren. He was preceded in death by his father Herbert in 1931, his mother Florence in 1976, his mother-in-law Florence Raymer in 1989, father-in-law John Raymer in 1992 and an infant great granddaughter, Ruby Green. He graduated from Wonewoc High School in 1942. Following high school he served with the Sixth Division of the Combat Engineers in the U.S. Army during WW II in the Philippines and Korea . He was then employed by Wisconsin Power & Light as a line foreman, retiring after 35 1/2 yrs. He then worked for Lands' End for 14 years. Dale was a founding member of the Iowa County Ambulance Service and served as a member of the Dodgeville Fire Department for many years. He married his wife Nancy in 1984. They enjoyed traveling and spent many happy vacations visiting family and spending time at their favorite vacation spot, Branson, MO. . Dale was a hard worker and always had a project going. His passion was his home. Dale rarely missed a day carefully manicuring his lawn, putting up holiday decorations or feeding the many birds that enjoyed his backyard. He took interest in everyone he met and was always quick with a story or joke. He enjoyed the simple things in life; fishing, bowling, trips to the cabin, a beer with the guys, cards, Friday fish frys, and perhaps most significantly, Sunday mornings with his Dodgeville United Methodist Church family. Funeral services will be held at 11:00 a.m. on Friday, August 16, 2019 at the DODGEVILLE UNITED METHODIST CHURCH. Pastor Jim Droste will officiate. Burial will be held in East Side Cemetery with Military Graveside Rites accorded by the Dodgeville Area Veterans. Friends may call from 4:00 p.m. until 7:00 p.m. on Thursday at the GORGEN-McGINLEY & AYERS FUNERAL HOME in Dodgeville and from 10:00 a.m. until 10:50 a.m. on Friday at the church.

Dodgeville - H. Dale Mortimer, age 94, of Dodgeville, passed away on Sunday, August 11, 2019, heaven got the best of the best when Dale was called home. Dale was born in Valton, WI on Jan. 11, 1925 to Herbert and Florence (Beier) Mortimer. He... View Obituary & Service Information

The family of H. Dale Mortimer created this Life Tributes page to make it easy to share your memories.

Send flowers to the Mortimer family.