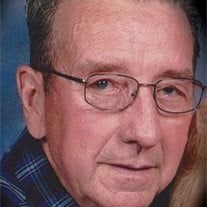 Mineral Point - Guerdon J. "Don" Brodbeck, age 79, of Mineral Point passed away peacefully on Wednesday, July 2, 2014 at St. Mary's Hospital in Madison. The son of Guerdon and Cecelia (Parish) Brodbeck, he was born at St. Catherine's Hospital in Kenosha on March 30, 1935. He grew up in the Platteville area. He married Rosemary Runde on July 10, 1954 at St. Mary's Catholic Church in Platteville. He worked for Harry Williams Tree Service in Platteville from 1953-1959, then as a Line Clearance Technician for Wisconsin Power & Light until retiring in 1994. He was a member of Ss. Mary and Paul's Catholic Church in Mineral Point. He was an avid gardener and shared his produce with his neighbors, friends, and family. He loved the outdoors, hunting, fishing, and sporting events. Don is survived by his wife of 60 years Rosemary; two daughters, Terri (Scott) Terrill of Milton and Deb (Bill) Schaaf of Geneseo, IL; a son Steven (Cathy) Brodbeck of Dane; 7 grandchildren, 5 great-grandchildren, and many nieces, nephews, relatives and friends. He is preceded in death by his parents, a brother John, a sister Annette, and two great-grandsons Drew and Owen Schaaf. A Mass of Christian Burial will be held on Saturday, July 12, 2014 at 10:30 a.m. at Ss. MARY & PAUL CATHOLIC CHURCH in Mineral Point. Fr. Monte Robinson will officiate. Burial will be in St. Mary's Cemetery. A visitation will be held on Friday, July 11, 2014 from 4:00 until 7:00 p.m. at the GORGEN FUNERAL HOME in Mineral Point, and on Saturday from 9:00 until 10:15 a.m. at the church. In lieu of flowers, memorials to the Hodan Center in Mineral Point would be appreciated.

The family of Guerdon J. "Don" Brodbeck created this Life Tributes page to make it easy to share your memories.