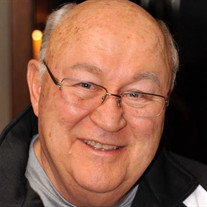 Mineral Point - Gregory W. “Big G” Gorgen, age 79, of Mineral Point, died on Saturday, September 1, 2018 at Upland Hills Health in Dodgeville. He was born on June 7, 1939 in Dodgeville, a son of the late William P. and Gladys (Laverty) Gorgen. He graduated from Mineral Point High School in 1957 and attended the University of Notre Dame for 2 years. He then enlisted in the US Army and served in the Reserves at the 44th General Hospital Unit for 7 years. He graduated from Wisconsin Institute of Mortuary Science in Milwaukee in 1962. On May 5, 1962, he married Joan L. Thiede at St. John’s Cathedral in Milwaukee. In 1963, Greg joined his father at Gorgen Funeral Home in Mineral Point to become a third generation funeral director in the family business. Greg was a member of Ss. Mary & Paul Catholic Church, the Mineral Point Lion’s Club where he was charter President in 1982, a 50 year member of the Knights of Columbus and served as past Grand Knight, a 30 year member and Honorary Member of the Mineral Point Fire Department. “Big G”, as he was affectionately known, was an avid supporter of Mineral Point athletics and loved watching his grandchildren’s activities. Big G also enjoyed bowling, playing softball, playing cards, golfing and looked forward to the annual Jack Invitational golf outing at Devil’s Head with his sons. He loved watching sporting events, especially Notre Dame, Wisconsin Badgers, the Chicago Bears, the Chicago Cubs and their World Series Title run in 2016. Greg is survived by his wife, Joan; his children, Grant (Ann), Mike (Jenny), Steve (Denise), Beth Larsen; his grandchildren, Lexie, Tyra, Grady, Gunnar, Matthew, Joshua, Ryan, Joey, Jake, Jaynie, Kiagh, Kendall; his brother-in-law, Richard (Diane) Thiede; his step sister, Dolores Gronewald; other relatives and many, many friends. He was preceded in death by his parents, his in-laws, Reuben and Dora Thiede, his step mother, Lucille Gorgen, his step brother, Don Gronewald. A Mass of Christian Burial will be celebrated at 11:00 a.m. on Friday, September 7, 2018 at Ss. MARY & PAUL CATHOLIC CHURCH in Mineral Point. Father Rev. Joseph Michael Tarigopula and Father David Flanagan will concelebrate. Burial will be held in St. Paul’s Cemetery. Friends may call from 3:00 p.m. until 8:00 p.m. on Thursday and from 10:00 a.m. until 10:50 a.m. on Friday at Ss. MARY & PAUL CATHOLIC CHURCH in Mineral Point. In lieu of flowers, the family suggests that memorials be made to the Mineral Point Fire Dept., the Mineral Point Rescue Squad, the Mineral Point Lion’s Club or to the family of Gregory Gorgen for donations to be made to other local charities.

The family of Gregory W. "Big G" Gorgen created this Life Tributes page to make it easy to share your memories.

Send flowers to the Gorgen family.