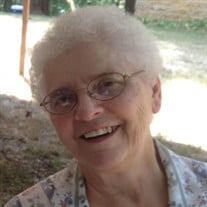 Mineral Point - Grace Ann Schaaf (nee Streng), age 82, died on Thursday, November 11, 2021. Grace grew up in Cascade, IA and was the last-born of nine children in a close-knit and happy family. She learned to play piano as a child; a skill that she used throughout her life as both a teacher and performer. Three of her older sisters became nuns, and in 1957 Grace followed suit. While an Adrian Dominican she was briefly known as Sister Ciara. She earned a master’s degree in Music Education and taught for 15 years at various schools in Arizona and Illinois, staying the longest at Boylan High School in Rockford, IL. Despite her successes as a teacher and a personal interest in her students, Grace did not find teaching fulfilling. Referring to her years as a classroom teacher, Grace often said “I love kids, and I love music. I did not love teaching kids music.” In 1973 Grace attended a retreat and experienced a profound call to get married. Shortly thereafter she sought and obtained a dispensation from her religious vows. Grace moved to Madison, WI where she became the head of Ward Brodt’s sheet music department. While in Madison she commented to her parish priest that she was praying for a husband; the priest told her that “Praying is good, but you should buy a new dress.” Having followed instructions, she married Harold “Pete” Schaaf in 1980 and moved to the Mineral Point area. After marrying, Grace occasionally joked that “As a nun I was sworn to poverty, chastity, and obedience, but I could only achieve one; I was neither poor nor obedient. As a farmer’s wife I’m still achieving one, and it isn’t obedience.” At the age of 44, she gave birth to her son Jonathan. Her son attests that she was an excellent mother. Grace is well-known to many in Southwest Wisconsin for a variety of reasons. She worked for 20 years at the Dodgeville H&R block; she directed the choir and played the organ at St. Mary and St. Paul’s; she taught countless piano lessons; and she played the keyboard at Faith Lutheran Church. Grace endured a lengthy battle with dementia. The family would like to thank staff members at both Sienna Crest and Bloomfield who contributed to her care. Grace is survived by her son Jonathan (Sarah) Schaaf; her siblings Denise Streng, Lloyd Streng, Clara Streng, and Mary Neiers; and numerous nieces and nephews. Grace is preceded in death by her parents; her husband Pete; siblings, John Streng, Bob Streng, Dorie Streng, Joan Hamilton. A Mass of Christian Burial will be held on Saturday, November 20, 2021 at 11:00 a.m. at Ss. MARY & PAUL CATHOLIC CHURCH in Mineral Point. Fr. Michael Tarigopula will officiate. Burial will be in St. Mary's Cemetery. A visitation will be held on Saturday from 9:30 a.m. until 10:50 a.m. at the church.

Mineral Point - Grace Ann Schaaf (nee Streng), age 82, died on Thursday, November 11, 2021. Grace grew up in Cascade, IA and was the last-born of nine children in a close-knit and happy family. She learned to play piano as a child; a skill... View Obituary & Service Information

The family of Grace A. Schaaf created this Life Tributes page to make it easy to share your memories.