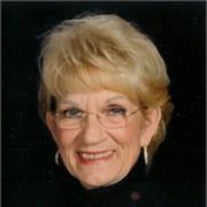 Dodgeville – Grace Margaret Hamilton passed away on December 9, 2021 in Eagan, Minnesota at age 90, following a long journey with Alzheimer’s Disease. She was surrounded by her family. Grace was born December 5, 1931 in Highland, Wisconsin, the youngest child of Ben and Clara (Rasque) Johanning. Grace grew up during the Great Depression on the family farm east of Highland in the days of wood stoves and horse drawn farm implements and before electricity or plumbing. She attended a one-room country school followed by high school in nearby Cobb. Following her schooling, she relocated to Dodgeville where she worked at the Iowa County Courthouse. It was there that she met the love of her life, Frank Hamilton, a local attorney whom she married at St. Anthony’s Church in Highland on November 27, 1954. They made their home and raised their family in Dodgeville for nearly 40 years, until Frank’s death in 1993. Grace relocated to Madison in 2003 where she married Joe Vander Zanden in 2004. The couple alternated between Madison and Leesburg, Florida until their marriage ended in 2011, at which time Grace moved to St. Paul, Minnesota. Grace loved dancing from a young age, beginning at local dances around Highland and especially at Castle Rock Ridge. Among her favorite bands was Dick Jurgens, whose hit song “Daydreams Come True at Night” was she and Frank’s “song.” She was an avid golfer well into her eighties and was proud of once having shot a hole-in-one. Grace’s love for animals, especially dogs, began as a child on the farm and stayed with her for life. She had an incredible knack for remembering literally everybody’s phone number (back when people remembered phone numbers.) She disliked making left turns, so when directions called for one, she often turned right instead and worked it out from there, mostly for the best. Grace was a devout Catholic who said a daily novena and attended daily mass for much of her life, mostly at St. Joseph’s Church in Dodgeville where she was an active parishioner. Of most importance to her was her family, and though disease compromised her memory late in life, she never lost her gracious smile or her happy spirit. Grace was preceded in death by her husband Frank on October 10, 1993; her parents; her four sisters Wilma, Selma (Larry) Peters, Irma (Daniel) Olson, Mary (Edward) Meudt, and two brothers Wilfred and Robert Johanning. She is survived by her three children: Joseph Hamilton (John Morse) in Sena, New Mexico, Tim Hamilton in Chicago and Elizabeth (Steven) Tredinnick in Dillon, Colorado; two children from Frank’s previous marriage: Dennis (Carolyn) Hamilton in Bloomington, Minnesota, and Mary Hamilton in Verona, Wisconsin; as well as her grandchildren: Patrick Tredinnick in Denver and Grace (Gio) Casillas Tredinnick also in Denver, and Michael (Katherine) Mueller in Richmond, Virginia, Teresa (Erin) Corning in Madison and David (Mani) Mueller also in Madison, and many nieces and nephews. A Catholic Mass of Remembrance will be held at 11:00 am on Monday, January 10, 2022 at ST. JOSEPH'S CATHOLIC CHURCH in Dodgeville, with visitation beginning at 10:00 a.m. Interment of ashes will be at St. Joseph’s Cemetery, next to her beloved husband Frank. Masks are required at all times inside the church. The family would like to thank the staff at Brookdale Senior Living in Eagan, Minnesota for their unflagging care and attention. In lieu of flowers, the family suggests a donation to charities fighting Alzheimer’s and dementia or caring for animals.

Dodgeville &#8211; Grace Margaret Hamilton passed away on December 9, 2021 in Eagan, Minnesota at age 90, following a long journey with Alzheimer&#8217;s Disease. She was surrounded by her family. Grace was born December 5, 1931 in Highland,... View Obituary & Service Information

The family of Grace M. Hamilton created this Life Tributes page to make it easy to share your memories.

Send flowers to the Hamilton family.