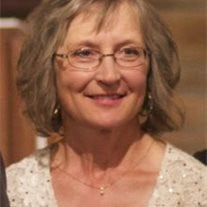 Mineral Point - Gloria H. Yager, age 57, of Mineral Point, died unexpectedly on Friday, September 30, 2016. Gloria was born on April 8, 1959, the daughter of Bernard and Marion (McCluskey) Walsh. She grew up on a century farm in rural Waldwick and graduated from Mineral Point High School in 1977. She married Mark Yager on June 2, 1979, and together they farmed and raised a family in rural Mineral Point for the past 37+ years. She loved her gardens and helping with farm work. She was always in the kitchen cooking and baking, and preserving her home-grown vegetables. She enjoyed spending time with her many friends and family members. She was a very devoted mother and wife, and she was anxiously awaiting the arrival of her first granddaughter. She will be missed dearly by her husband, Mark "Elmer" of Mineral Point; her children, Steph Yager of Mt. Horeb, Brad (Judy) Yager of Dodgeville, Megan Yager (Jason Miller) of Mineral Point, and Alicia Yager (Trent Artus) of Dubuque, IA; her mother, Marion Walsh of Mineral Point; her brother, Blaine (Jolene) Walsh of Mineral Point; and many more family members and friends. She was preceded in death by her father, Bernard Walsh; and her mother- and father-in-law Donna and Leo Yager. A Memorial Mass of Christian Burial will be held at 11:00 a.m. on Tuesday, October 4, 2016 at Ss. MARY & PAUL CATHOLIC CHURCH in Mineral Point. Monsignor Daniel Ganshert will officiate. A visitation will be held on Monday, October 3, 2016 from 4:00 until 8:00 p.m. and on Tuesday from 10:00 until 11:00 a.m. all at Ss. MARY & PAUL CATHOLIC CHURCH. In lieu of flowers memorials to the family are suggested. We will never forget your kindness, humor and love.

The family of Gloria H. Yager created this Life Tributes page to make it easy to share your memories.

Send flowers to the Yager family.